After his first year in office, President Biden doesn’t have much to brag about. That’s especially true when it comes to the economy. So much so that he’s reached into his bag of political tricks and pulled out an old one. He’s trying to make himself look better by fudging facts.

The latest fact-fudging comes in the form of claims his policies are successfully reducing the U.S. government’s budget deficit. But as CNN’s Daniel Dale reports, while the numbers are accurate, his claims of success in reducing the deficit rely on distorting the truth.

“Let me remind you again: I reduced the federal deficit,” Biden said in a speech on Wednesday. “All the talk about the deficit from my Republican friends, I love it. I’ve reduced it $350 billion in my first year in office. And we’re on track to reduce it, by the end of September, by another 1 trillion, 500 billion dollars—the largest drop ever.”

Biden’s figures for both the 2021 fiscal year (which ran through last September) and the ongoing 2022 fiscal year (which runs through the coming September) are accurate, though the $1.5 trillion figure for 2022 is a projection. But some experts on fiscal policy say Biden is distorting reality when he claims that he is personally responsible for the deficit going down.

It’s possible to determine if President Biden’s claim of success in shrinking the budget deficit is true. We need to compare the government’s actual deficits to what they would be if none of his fiscal policies were ever implemented.

That’s why the CBO’s February 2021’s budget projections are important. They provide a good estimate of how big the deficit would be without any impact from President Biden’s fiscal policies. We can use these estimates to evaluate how much true success President Biden has had in shrinking the deficit. 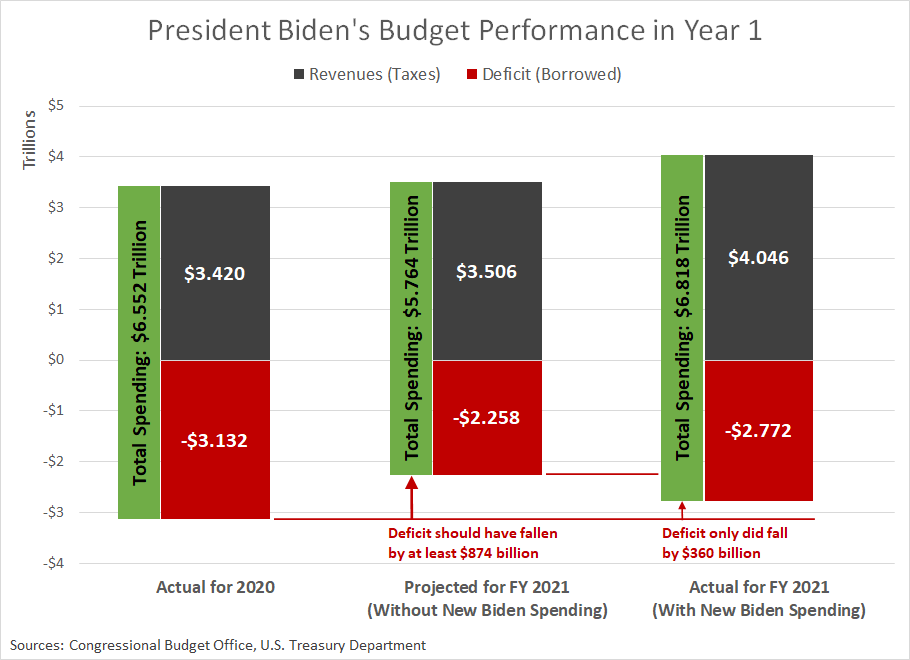 It Could Have Been Even Better

With many states lifting their COVID lockdowns in 2021, the U.S. economy recovered more quickly than the CBO had forecast. The U.S. government took in $540 billion more in revenue than the CBO projected once these economic shackles were removed.

Had President Biden not increased the government’s total spending by $1.054 trillion, the budget deficit could have shrank by $1.414 trillion. That would truly have been a remarkable deficit shrinking success.

But he didn’t. President Biden’s claims of success depend on nobody paying close attention to what he’s saying. Because if they do, once they see through the sham, they cannot unsee it.