Normally, when people talk about how President Biden’s American Rescue Plan (ARP) failed, it’s about how the stimulus helped create the worst inflation in 40 years. But did you know it was a total bust for creating jobs too?

The American Enterprise Institute’s Matt Weidinger has the receipts to prove it. He describes how many new jobs were expected both with it and without it in 2021 and compares those figures with the number of jobs that actually were created.

The nonpartisan Congressional Budget Office projected on February 1, 2021 that monthly job growth in 2021 (specifically, the change in payroll employment between the fourth quarters of 2020 and 2021) would average 521,000—without enactment of the American Rescue Plan. As displayed in the chart below, that would mean a gain of 6.252 million jobs over those four quarters. With the release of today’s data for December 2021, we now know payroll employment in the fourth quarter of 2021 averaged 148.735 million—an increase of 6.116 million compared with the average of 142.619 million in the fourth quarter of 2020. That means the job growth the President praised this week has fallen 136,000 jobs short of what was expected under the policies he inherited. 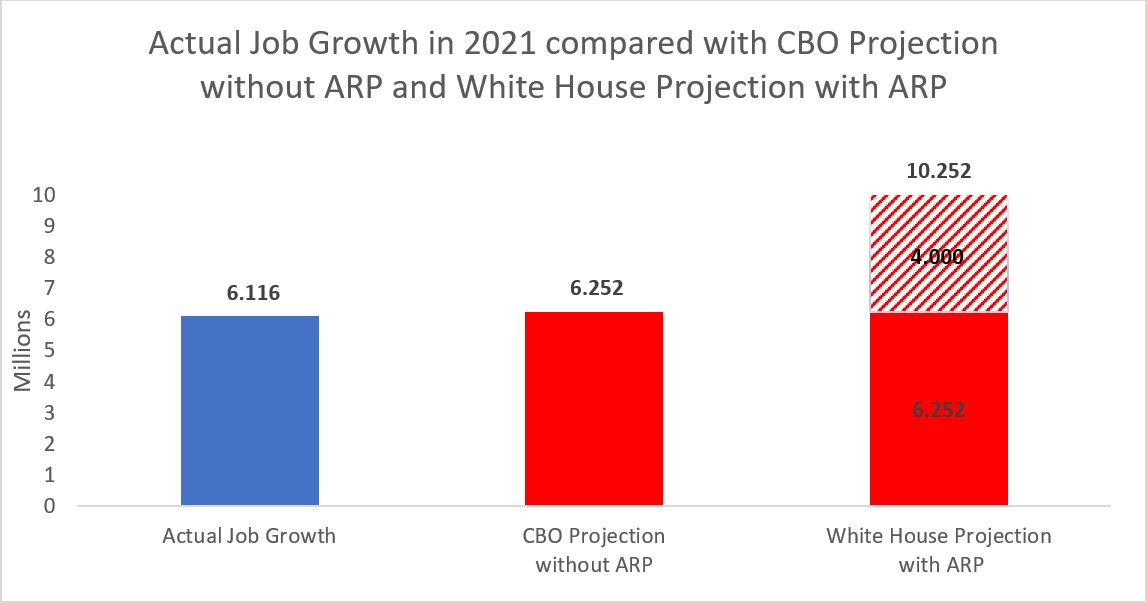 But the story doesn’t end there. As I reviewed last month, President Biden and congressional Democrats promised their $1.9 trillion American Rescue Plan would create millions of additional new jobs this year—on top of what White House economists called the “dire” baseline of 6.252 million new jobs reflected in CBO’s projection without that enormous legislation. The White House on February 3 stated that legislation would mean “a difference of 4 million jobs in 2021.” House Speaker Nancy Pelosi (D-CA) repeated that claim, stating that “if we do not enact this package, the results could be catastrophic,” including “4 million fewer jobs.”

Yet as the chart above displays, not one of those four million additional jobs supposedly resulting from that $1.9 trillion spending plan has appeared, as job creation in 2021 did not even match CBO’s projection without that legislation.

By its own definition, the Biden administration’s stimulus produced a “dire” and “catastrophic” outcome. That’s because the ARP’s “stimmy” checks funded and increased demand without increasing the productivity of the people who cashed them. Is it really any surprise shortages, inflation, and fewer new jobs than would have been created without President’s Biden stimulus has been the result?