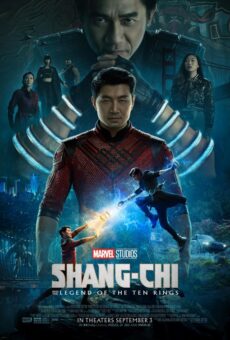 One of the more surprising reactions to Shang-Chi and the Legend of the Ten Rings might be how “normal” it is. While Shang-Chi is part of the Marvel Superhero universe, the movie refreshingly draws more from fantasy and mysticism inspired Asian myth than science fiction. The movie, and audiences, benefit.

Xu Shang-Chi (Simu Liu) is the son of Xu Wenwu (Tony Leung). Wenwu is a man of legend who uses the power given him by a magical set of ten rings to consolidate personal power. Wenwu’s thousand-year quest for domination and power is unrelenting. In contemporary times, he discovers clues to a power more fierce than the ten rings. But it’s hidden and guarded by the inhabitants of the mysterious village of Ta Lo.

As legend has it, we are told, he meets his match in Ying Li (Fala Chen), a powerful female guardian of Ta Lo. Through a mystical combination of energy and martial arts, Li defeats Wenwu and the ten rings. Enraptured by Li’s command of this energy and her martial skills, Wenwu gives up the rings and commits to a mortal family life satisfied by love and honor.

Wenwu’s past, however, won’t let him go. When Li is killed as part of a blood oath, his obsession for avenging his wife’s death draws him back to the dark power of the rings. He raises his son, Shang Chi, to become a highly skilled assassin. Meanwhile, in what some may consider social commentary on modern China, Wenwu neglects his equally talented and traumatized daughter Xu Xialing (Meng’er Zhang).

The Limits of the Pursuit of Power

But Shang-Chi cannot follow through on his father’s ruthless vision for his life. He flees to San Francisco where he takes on the first-generation immigrant persona of Shaun. He is taken under the wings of a Chinese American family. Their daughter, Katy (played brilliantly by Awkafina, The Farewell, Crazy Rich Asians), becomes his best friend.

Shaun and Katie live laid-back lives as parking valets at a high-end hotel. Their highest aspirations are earning enough cash to party and play karaoke. Katy is unaware of Shaun’s upbringing or training until Wenwu decides it’s time for Shang-Chi to take his place beside him as the overlord of the Ten Rings crime syndicate.

Shaun, however, is an unwilling successor. This tension, combined with his desire to protect his sister from his father, sets in motion unrelenting action. Director Destin Daniel Cretton (Glass Castle, Just Mercy) seamlessly blends Western concepts of courage, redemption, and humor against Asian myth, ethics, and imagery.

Awkwafina’s interpretation of Katy provides an excellent foil for Shaun. Screenwriters David Callaham, Cretton and Andrew Lanham layer in explanations of more conventional Chinese culture and attitudes without slowing the pace of the film. Katy and Shaun’s friendship never loses its intimacy despite the fantastical circumstances. This allows Shang-Chi and the Legend of the Ten Rings to cross cultural boundaries while staying well within the fantasy and action movie genres.

But Shang-Chi is buoyed by more than just good acting and a strong script. The story, and action, are propelled by classic tensions within Chinese culture. Asian storytelling tends to transcend transactional relationships and the brute use of force. Instead, they focus on relations between people and nature.

The stories and sub-plots in Shang-Chi grapple with rebellion against patriarchy, familial loyalty, and honor. Shang-Chi, Katy, and Xiliang are confronted with conflicts over whether they can break from their true nature or alter their destiny.

One easily ignored theme, however, may be the most controversial. Disney (and Marvel) clearly expected Shang-Chi to break into the massive Chinese market. They made significant changes to the Marvel character and story accordingly. Yet, given China’s disastrous attempt at population control through its “one child policy,” Shang-Chi carries a core theme that is also biting social commentary.

This disastrous policy had the predictable and tragic outcomes. Infanticide favoring boys over girls created one of the most gender unbalanced populations on Earth. Xialing’s neglect and her character arc parallel the personal trauma inflicted by the long-arc of this one-child policy. This trauma is a strong motivating force for Xialing.

While Western audiences might see this subplot as simply a creative choice about sibling rivalry, Shang-Chi and the Legend of the Ten Rings carries a much larger and darker message than perhaps even the screenwriters anticipated.

Cretton and Callaham, both Asian Americans, have said they hoped Shang-Chi and the Legend of the Ten Rings would do for Asian cultural awareness what the Black Panther did for African Americans. They may well have succeeded.

However, given the rich history of Asia-influenced films in American pop culture – from the classic Bruce Lee movies Fist of Fury and the to the box office of legendary action stars such as Jackie Chan to the artistic excellence of Crouching Tiger, Hidden Dragon – Shang-Chi had less ground to cover.

Nevertheless, as Marvel’s first major film release with an Asian lead, a predominantly Asian cast, and helmed by an Asian director, Shang-Chi and the Legend of the Ten Rings hits all the major marks. Disney, Marvel, Cretton, and Callaham have created an excellent, well crafted, well executed movie.