The $1.9 Trillion “Rescue” Plan May Cause Small Uptick in the Short Term, but Will Only Add to Future Economic Growth Woes

The Congressional Budget Office has issued its 2021 Long-Term Budget Outlook months ahead of its usual schedule. The CBO forecasts that the publicly held portion of the national debt will grow to more than double the size of the U.S. economy during the next 30 years. 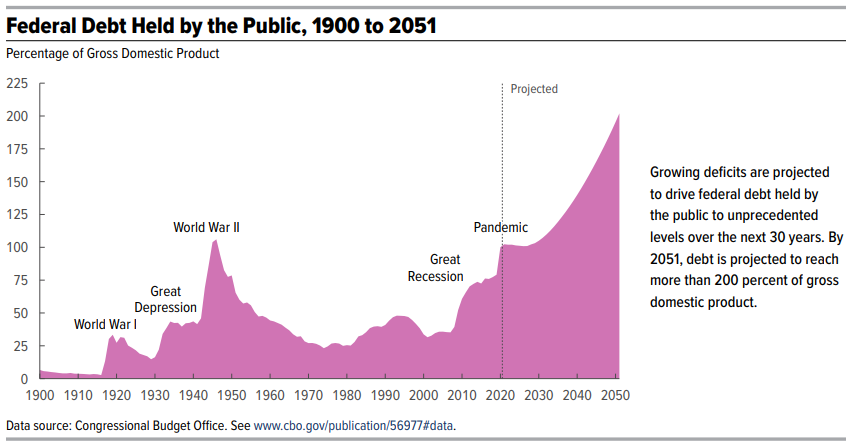 Here is how Reuters describes the CBO’s projected runaway growth of the U.S. government’s debt:

The U.S. federal debt burden will double over the next 30 years, reaching 202% of economic output in 2051, as deficits grow and interest rates eventually rise, the Congressional Budget Office said on Thursday in its latest long-term budget projections.

The non-partisan CBO projected that federal debt will reach 102% of gross domestic product in 2021 due to massive spending associated with the coronavirus pandemic. This spending is expected to fade over the next decade, shrinking annual deficits to an average of 4.4% of GDP in the 2022-2031 period, from 10.3% in 2021.

The culprit behind the runaway debt will come as no surprise: runaway government spending. The CBO provides the following three-part chart to show that unrestrained spending will cause the exponential growth of the national debt well above the national emergency levels of both World War 2 and the Coronavirus Pandemic. 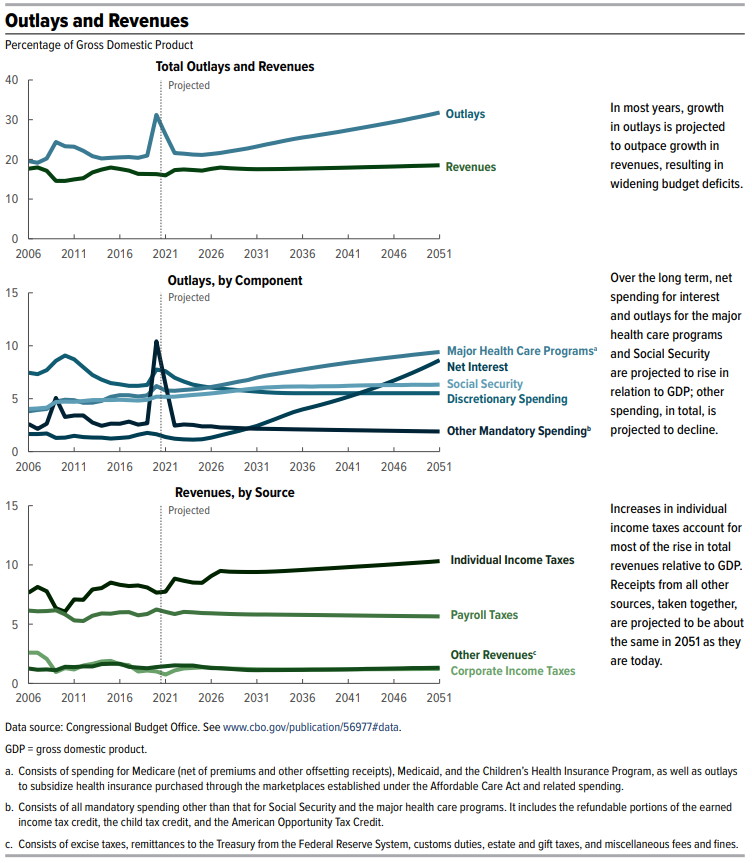 One of the two biggest drivers in the U.S. government’s rising spending is the combined expenditures for major health care programs, such as Medicare, Medicaid, and to sustain the Affordable Care Act. The bigger driver, however, is net interest on the national debt, which is itself driven by two factors. The national debt has already grown to an enormous size, and the CBO reasonably expects interest rates will rise in the future.

Outside the CBO’s Current Long-Term Outlook

Reuters also reports what the CBO’s projections do not include:

The projections do not include any effects of President Joe Biden’s proposed $1.9 trillion coronavirus stimulus bill, nor his planned investments in infrastructure, education and research.

The $1.9 trillion American Rescue Plan lacks bipartisan support because the spending bill is larded with waste. Wasteful expenditures include political payoffs and bailouts to support the special interests of politicians and bureaucrats.

But Wait, It Gets Worse

As written, the newly passed legislation is filled with so much waste analysts believe it will shrink the U.S. economy into the future:

Scholars at the University of Pennsylvania’s Wharton School of Business analyzed the plan and found that the massive spending splurge—which costs roughly $13,260 per federal taxpayer—would only cause a “slight uptick” in economic growth in 2021. The analysts warned that this minor boost would just be “instant gratification,” and that the skyrocketing government debt caused by the blowout legislation would undermine any gains in the medium-to-long term.

“The existence of the debt saps the rest of the economy,” Wharton analyst Efraim Berkovich said. “When the government is running budget deficits, the money that could have gone to productive investment is redirected.”

“Effectively, what we’re doing is taking money from [some] people and giving it to other people for consumption purposes,” he continued. “That has value for social safety nets and redistributive benefits, but longer-term, you’re taking away from the capital that we need to grow our economy in the future.”

What Berkovich describes is the outcome of the failure of fiscal discipline by President Biden and the leaders of the U.S. Congress. Ordinary Americans will ultimately pay the price for their shared failings.