After running up the national debt by more than three trillion dollars in the past four months, some U.S. senators are starting to have second thoughts about whether that borrowing might have some negative effects for the nation’s economy.

It is a good concern to have, especially since the U.S. Congress is currently negotiating whether it will spend another $1 trillion or another $3 trillion in the next several months. Since much of that money will be borrowed from the Federal Reserve, the additional borrowing could affect interest rates, the value of the dollar, and the economic recovery from the coronavirus recession. The Hill‘s Alexander Bolton has the story:

A group of Senate Republicans are raising red flags over the rapid expansion of the Federal Reserve’s balance sheet, which they worry could impact interest rates, the strength of the U.S. dollar and the overall U.S. economy before colleagues realize it’s a serious problem....

Now more mainstream members of the GOP conference are sounding the alarm over the Federal Reserve’s balance sheet, which has ballooned from $4.27 trillion on March 11 to $6.93 trillion on July 22. During that span, the Fed’s ownership of U.S. Treasury securities has soared from $2.52 trillion to $4.27 trillion.

Some Republicans worry that with the U.S. debt climbing, they’re seeing a drop off in demand in the world’s financial markets for U.S. bonds, which could foreshadow climbing interest rates and a major problem for the economy down the road.

According to the Federal Reserve, the nation’s central bank has increased its holdings of debt securities issued by the U.S. government during the past four months by nearly $2.4 trillion. The chart below shows that new mountain of debt rising rapidly from the end of March to mid-May 2020, before continuing to rise more slowly since then. 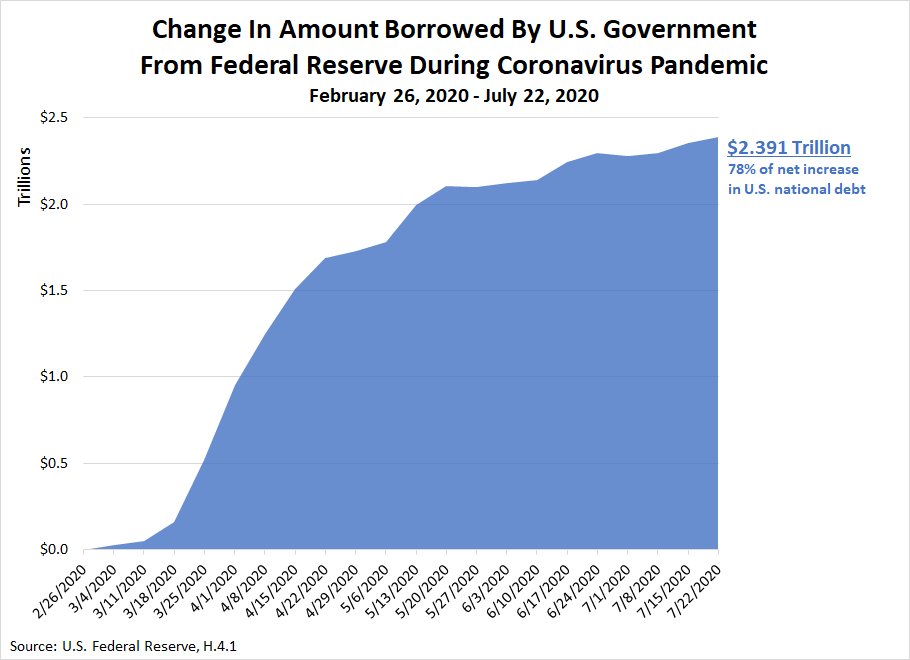 Change In Amount Borrowed By U.S. Government From Federal Reserve During Coronavirus Pandemic

Several analysts are considering what could possibly go wrong in racking up so much national debt so quickly.

Maya MacGuineas, president of the bipartisan Committee for a Responsible Federal Budget, said Congress and the Fed are in uncharted waters.

“The risk of being in unprecedented territory, as we are both with borrowing and the Fed is we don’t know what will happen and there are plenty of risks and upward pressure on interest rates is definitely one of them,” she said.

Upward pressure on interest rates would potentially slow the recovery from the coronavirus recession, making it harder for the economy to grow. Other analysts are concerned about what that borrowing could mean for the buying power of the dollar, which would be felt in the pocketbooks of ordinary Americans.

Bank of America Merrill Lynch chief investment strategist Michael Hartnett warned on Friday that growing debt and maxed out fiscal policy will cause a “great debasement” of the dollar.

Hartnett wrote that erosion of the dollar is “underway as the default narrative for U.S. economy with excess debt, insufficient growth, and maxed-out monetary & fiscal stimulus.”

The old lesson that Washington, D.C., politicians need to relearn is that you cannot borrow your way to true prosperity. It is a positive sign that some on Capitol Hill are becoming concerned by how fast the national debt is growing. But it is depressing that this concern seems to be shared by such a small handful of senators.