Although I stand by my assertion in my previous post that “Death by coronavirus is not the solution to the homeless crisis anyone wants,” the City of San Francisco’s actions are certainly making it seem otherwise.

The homeless, and especially the chronically homeless who comprise most of the people on the streets, are largely male, older, and unhealthy. Living on the streets takes a toll that makes a 50 year-old homeless person more comparable to a 70 year-old non-homeless person. By definition, therefore, this is a highly vulnerable population for whom social distancing guidelines would be especially relevant. Yet at the same time, life on the streets precludes following those guidelines. Homeless encampments, especially in a geographically-constrained city like San Francisco, are closely-packed and lack facilities for basic hygiene, much less hand-washing stations.

The vulnerability of the homeless population has been in the news for weeks, yet the government has yet to devise, much less execute on, any cohesive strategy. The City initially sent a perplexing memo to shelters telling them not to move beds 6′ apart. Now, it’s advised shelters to both keep their residents 6′ apart and not kick anyone out—a mutually-exclusive choice given the tight quarters in most shelters.

Most recently, the City set up a shelter in San Francisco’s Moscone convention center that looks designed to be a coronavirus breeding lab. The taped-off spaces may be 6′ square, but every occupant would have to stay precisely in the middle of one’s square to maintain a 6′ distance—and they are not dealing with a healthy population to start with: 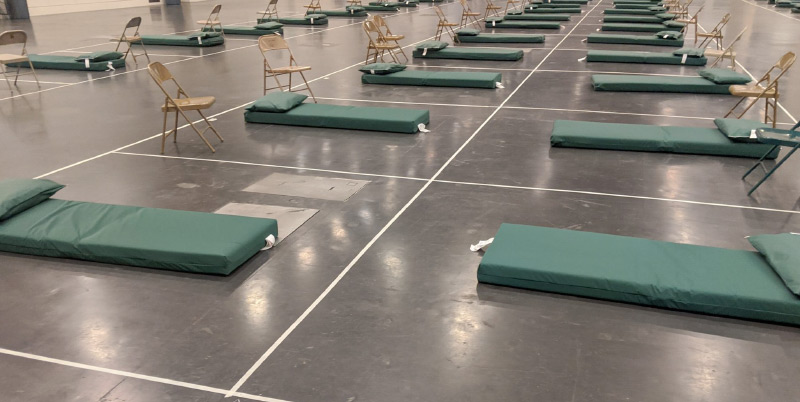 An inside source reported:

“People are given a wristband with their bed number on it and shown to a tiny mat on the floor with a folding chair. There aren’t many people staying here yet, but there are going to be hundreds of people, all breathing each other’s coughs.”

Fortunately, protests erupted before the space could be populated, and the city backed off from using it.

So, it’s back to the hotel option–with the all the questions this raises remaining unaddressed, and the City adding more daily as it dithers over who would be thus housed.

Local residents and philanthropists whose hearts go out to the homeless—or who simply want to help forestall a true pandemic among the vast unhoused population in their midst—would be well advised to quickly seek out private agencies with ready solutions such as the Salvation Army.

The sooner we all wise up and realize that the government’s “handling” of this “crisis” is nothing unusual–this is quite simply the way government always exacerbates every challenge–and withdraw consent for the government to be the “solution-provider,” the better all of our resources can be redirected in truly transforming lives and communities for the better, through private initiative and enterprise: as here, here, here, here, and more.