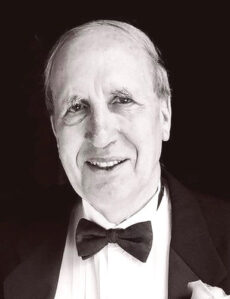 I was privileged to present a tribute at the memorial celebration for the life of Wolfgang Dieter Tede, on Saturday, October 19, 2019, at the St. Francis Yacht Club in San Francisco. He was a member of the Board of Directors of the Independent Institute for over twenty years, and here is an edited version of my presentation:

I am deeply honored to have the opportunity to speak in tribute about our very dear friend and colleague Dieter Tede, the remarkable immigrant who became a model global entrepreneur.

I first met Dieter in 1994 and visited with him and his beautiful wife, the late, renowned, mezzo-soprano singer, Margery Crockett Tede, in their lovely home in San Francisco. I already knew of his highly successful work in maritime shipping as Founding Partner of Marine Chartering Company, the worldwide, multi-service ocean transportation brokerage firm (see his engaging, illustrated book, The First Forty Years: Marine Chartering Company, Inc.) and other ventures, including producing vintage wines (Audubon Cellars and later the Hooper Creek Winery).

During my visit however, I further learned that as a small boy, Dieter had come to understand firsthand the horror of tyranny and economic hardship, having been born in Krefeld, Germany, a few months after the Nazis seized power, and then later living under the Soviet occupation. In the aftermath of World War II and at the age of twelve, having survived the air raids of Berlin, rationing, and food and other shortages, he and his family abandoned their home and all of their possessions to move for liberty into what became West Berlin. That personal experience lasted throughout his lifetime as he became a devoted supporter of individual freedom, economic opportunity, private entrepreneurship and innovation, and human rights and well-being.

We were deeply privileged to have him as a member of the Board of Directors and a devoted supporter of the Independent Institute’s many publications, events, and media projects for over 20 years. He especially enjoyed our recent event, “An Evening with Jordan B. Peterson: The Meaning and Reality of Individual Sovereignty.” Dieter’s keen insights and wise counsel on our Board, including his chairing the Audit Committee, always reflected his enormous knowledge and experience, immense integrity, good will, and personal charm.

In reflecting today on those many years with him, two of many memorable moments especially come to mind. The first was when in 2014 I presented at a Board meeting copies of our then new, path-breaking and already widely acclaimed book, Gun Control in the Third Reich: Disarming the Jews and “Enemies of the State,” by the distinguished historian and legal scholar Stephen P. Halbrook. Dieter immediately sat up, picked up the book, grasping its significance, and began translating for the other Board members from the front cover the wording from the reproduced original German document of the ominous and brutal Nazi gun-ban edict to disarm the Jews.

The second memorable moment occurred when he came by to visit with me one day and surprised me by pulling out of his bag seven Deutsche Mark notes from the German hyperinflation in the early 1920s after World War I. The notes track the the irresponsible debasement of the currency from 1921 to 1923 by the Reichsbank (Germany’s central bank, 1876-1945) to fund the huge reparations imposed by the Versailles Treaty, which plunged the already devastated German people into massive unemployment, destitution and misery. The notes he gave me include one for 500 marks and then 5,000, 10,000, 20,000, 200,000, 2 million, and 5 million, literally until the notes became worth less than the paper they were printed on. Dieter knew that the government central bank’s malfeasance was a major factor in the rise of fascism in Germany, and he wanted Independent to educate people of this historic catastrophe, which has since similarly plagued Zimbabwe, Venezuela, Peru, Congo, China, Turkmenistan, Belarus, and many other countries. (You can see why we were so delighted to have him as chairman of our Audit Committee.)

We are framing these notes in his honor and as a warning from history for today and future generations.