There are now 90 homeless camps in Oakland—more than one camp per square mile—most even worse than that pictured, each littered with unimaginable filth and trash.

Yet how does the government choose to allocate the resources it never fails to remind us are severely limited—it can’t pave the streets, educate kids, respond to 911 calls, or do anything to stop spiraling homelessness? 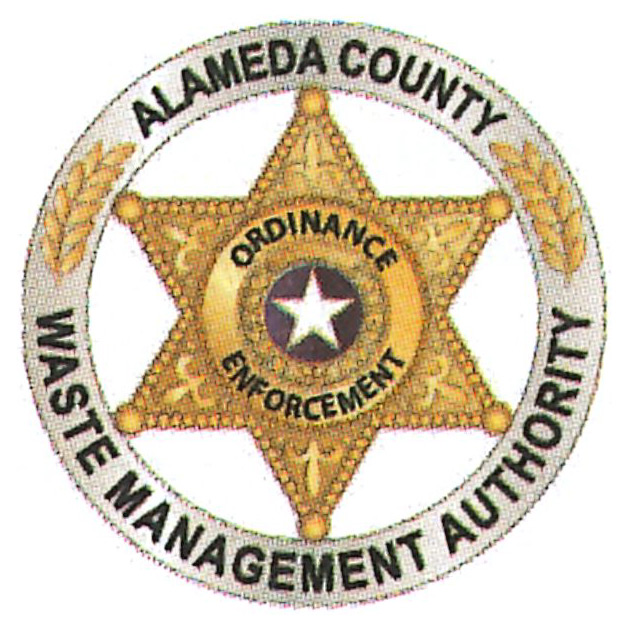 We received via Certified Mail a notice bearing this badge, of our Violation of the “Mandatory Recycling and Plant Debris Disposal Ban Ordinances,” accompanied by seven photos of the outside and interior of our garbage dumpster, showing—horrors!—a cardboard box and some lunch room food waste included in our trash!

The following violations and fines were checked:

One can only imagine the manpower going into such “dumpster-diving” of every dumpster in the county, recording multiple images for every one found with any items covered by the Ban, and the personnel, paperwork and Certified postage for its enforcement.

Meanwhile, we pay the following for garbage services, monthly:

In all, nearly $1,000/month for a small office building in which fewer than 30 people are employed.

Maybe we would consider it worth it—if we weren’t also paying private haulers to take away the items regularly illegally dumped here, and weren’t otherwise assaulted by piles of trash all over Oakland (ref. photo above).

Meanwhile, members of the private sector have been taking matters into their own hands–see, for example, Scott Presler’s #CleanUp movement that has done trash clean-up in Baltimore, Newark, Virginia Beach and Los Angeles; and Oakland’s Pothole Vigilantes.

The response by the powers-that-be?

Thanks PVs [Pothole Vigilantes], this job will be for in-house union pros.

While the Baltimore Sun’s editorial board questioned Presler’s motives for his group’s clean-up there, saying:

Call us skeptical.... Whatever he says his motives were, Mr. Presler’s presence in Baltimore reinforces the tired image of our failing urban cores.