No Spending Growth Restraint in Sight on Capitol Hill

Earlier this year, the White House indicated that the U.S. government would spend over $4.5 trillion dollars by the end of the U.S. government’s 2019 fiscal year on September 30, 2019. Unless something changes dramatically over the next three months, the government’s latest Monthly Treasury Statement confirms it will meet that target, as federal spending in FY 2019 will exceed the amount of money spent in FY 2018 by more than 10 percent. 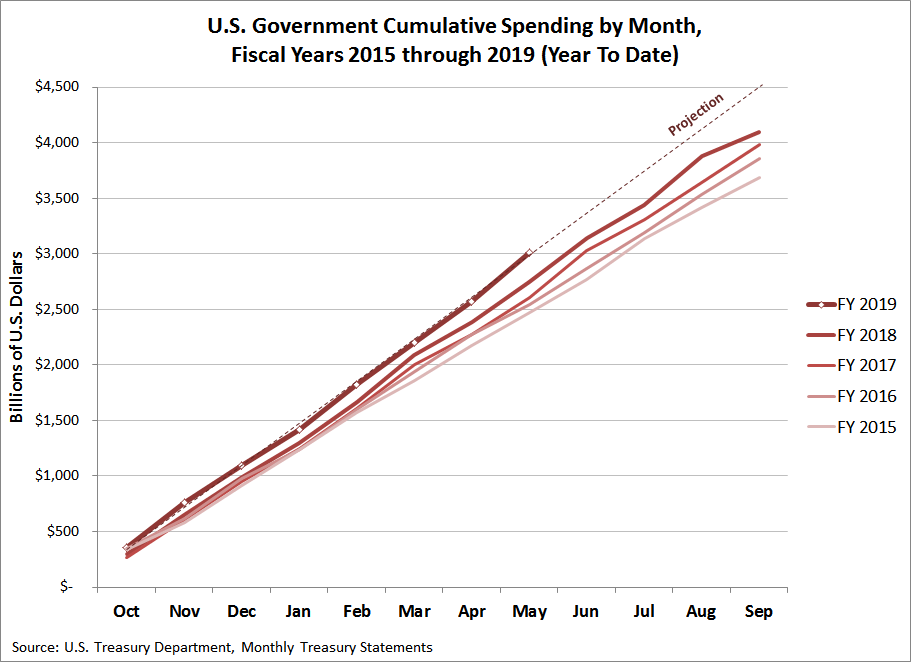 This is further proof that the one thing politicians and bureaucrats can absolutely do well is to spend exactly as much money as they say they will. That it doesn’t matter which political party they belong to, however, was confirmed a little over three weeks ago, when a bipartisan coalition of U.S. senators joined together to kill a pretty simple plan to balance the federal budget by reducing planned spending by just 2 percent a year over each of the next five years. Reason‘s Eric Boehm delivers the epitaph for spending restraint on Capitol Hill:

This year, Sen. Rand Paul’s (R–Ky.) effort to balance the federal budget didn’t even get a floor vote in the Republican-controlled Senate.

Paul’s so-called “Pennies Plan” failed a procedural vote on Monday evening when only 22 senators voted in favor of a cloture motion that would have brought the bill to a final vote. A majority of Republicans and all Democrats voted against proceeding to a floor vote on the bill. It’s another sign that fiscal responsibility is all but dead in Congress, even as the national debt heads toward record highs and the budget deficit approaches $1 trillion this year....

Paul’s proposal called for cutting 2 percent from the federal budget for each of the next five years and would reduce federal spending by about $11 trillion over the next decade—even though spending would rise after the first five years. It’s an adaptation of the so-called “Penny Plan” that Paul has been pushing for several years, though he now says an additional penny in cuts for every federal dollar spent is necessary to get the budget to balance.

Under Senator Paul’s new “two-penny” plan, after five years, reducing federal spending by 2 percent a year through 2024 to balance the budget would slowly lower spending to look a lot like the line for FY 2018 in the chart above. Instead, under the White House’s spending projections, federal spending will rise at nearly 4 percent and will top $5.4 trillion in five years, almost a trillion more than what the U.S. government is on track to spend in 2019.

The feds are also on track to set a new record for the amount of money they will collect in taxes during its 2019 fiscal year, with revenue forecast to be more than one trillion less ($3.4 trillion) than the amount it will spend ($4.5 trillion).

If anyone ever asks why the U.S. government has such a problem with red ink, the correct answer to that question is “It’s the spending, stupid!”