How Good Is Your State’s Credit Rating?

Writing at City Journal, Steven Malanga hones in on 10 state governments that have chronic overspending problems.

Since 2003, ten states, like impulse buyers wandering through a mall on Black Friday, have repeatedly run deficits, spending more than they generate in taxes, fees, and federal grants, and “pushing off to future taxpayers some past costs for operating government and providing services,” notes Pew Research in a new study. Working from states’ comprehensive annual financial reports, which give a more accurate picture of spending than government budgets, the nonpartisan Pew found that the worst offender was New Jersey, which took in just 91.3 percent of what it spent in the last 15 years. Not far behind were Illinois, Connecticut, Massachusetts, Kentucky, Maryland, New York, California, and Delaware—all in the red for 2003–17, using a combination of debt and deferred payments to live beyond their means.

There’s an obvious problem with continually spending more money than you have: it hurts your credit rating. The worse the overspending, the lower the credit rating, and the more it costs to continue your overspending habits through being charged higher interest rates.

The map below shows how credit rating agency Moody’s ranked each state government’s creditworthiness in March 2019, except for Wyoming, whose credit they don’t cover. 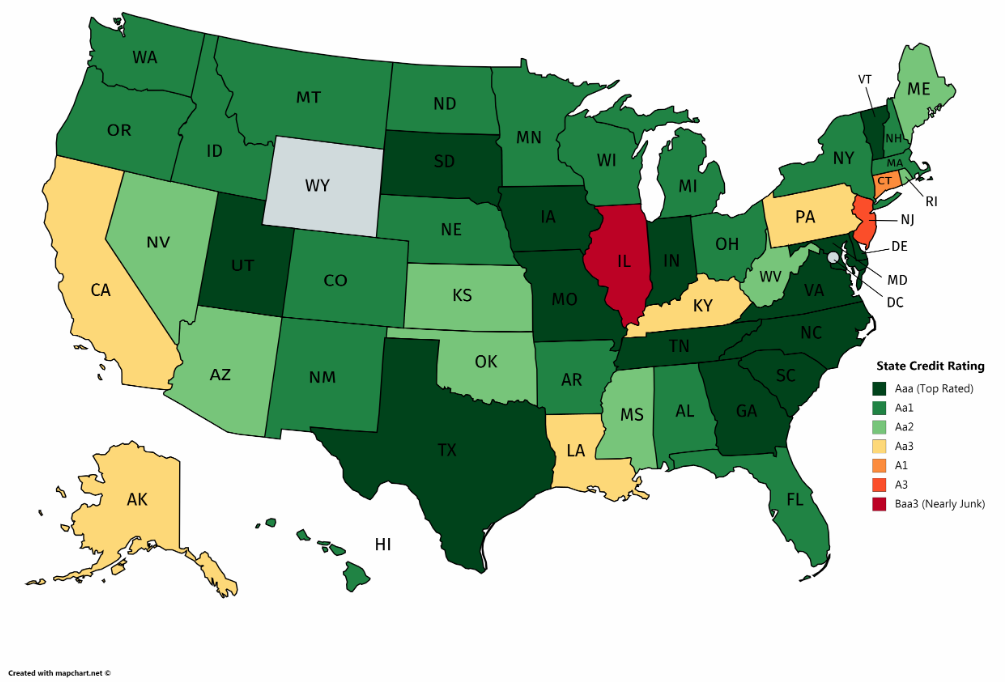 In this map, the greener a state is, the better off it tends to be, while the redder a state is, the worse off its fiscal health is. Not surprisingly, the states with the worst chronic overspending history show up with the lowest credit ratings.

Any state with a Moody’s credit rating of Aa3 or lower is effectively paying more significant interest to continue borrowing to support its overspending habits, where taxpayer dollars are frequently diverted away from delivering the services that residents expect state governments to provide.

Malanga identifies a major problem shared by many of the states who rank at the bottom:

One major problem is that state and local pension systems have kept taking on debt even during the recovery, forcing states to devote more of their budgets to retirement costs. State pension systems were, on average, 87 percent funded before the 2008 crash—but despite the stock-market recovery, by 2017, they were only 70 percent funded. Over that period, states have doubled the money they put annually into their pension systems, but it hasn’t been sufficient. Not surprisingly, the states that regularly run real deficits have some of the worst pension woes in America. New Jersey, Connecticut, Illinois, and Kentucky, for example, have the lowest-funded state pension systems, while California faces the biggest overall pension debt among the states.

If you live in those states, how much do you suppose your share of paying those pension liabilities are?