Time for California’s DMV to Enter the 21st Century

The California Department of Motor Vehicles (DMV) has long been characterized as the embodiment of government ineptitude, but a series of recent events have taken the department’s incompetency to a new level. For example, during the past year customer lines have stretched out through its branch office doors, wrapped around the buildings, and flowed down sidewalks, reflecting the dramatic increase in wait times suffered by California residents. Wait times of five to seven hours were common throughout the state. The problem is likely to continue as 23 million Californians have yet to obtain a federally mandated Real ID card, required by October 1, 2020, in order to board an airplane without a passport.

In response to the chaos, newly inaugurated California Gov. Gavin Newsom (D) created a “DMV Reinvention Strike Team” in early January to offer recommendations for “new long-term leadership and reform at the DMV.” The Strike Team, led by the Secretary of the California Government Operations Agency Marybel Batjer, will present its findings after a review. An important component of its recommendations should be the seamless integration of new, proven technology into DMV operations to help improve customer service, especially to reduce wait times and long lines.

The California DMV is a relic of days gone by; it still uses paper and clipboards in many cases. Its branch offices still do not accept credit cards. In a state that has led the global technology revolution, the DMV should be doing more to integrate technology into its operations to fix obvious problems. This is what successful private companies strive to do, which is another reason to eventually replace the DMV with cutting-edge private vendors. But until that happens, at the very least, contracting for the use of some technological assistance services would help alleviate the DMV of tasks it has proven unable to manage.

One such advance is provided by QLess, a company headquartered in Pasadena, that is better suited to handle queues (we thank QLess for giving us access to previously unpublished information). As the figure below shows, QLess offers virtual check-ins and lines, as well as mobile notifications of wait times and place in line. 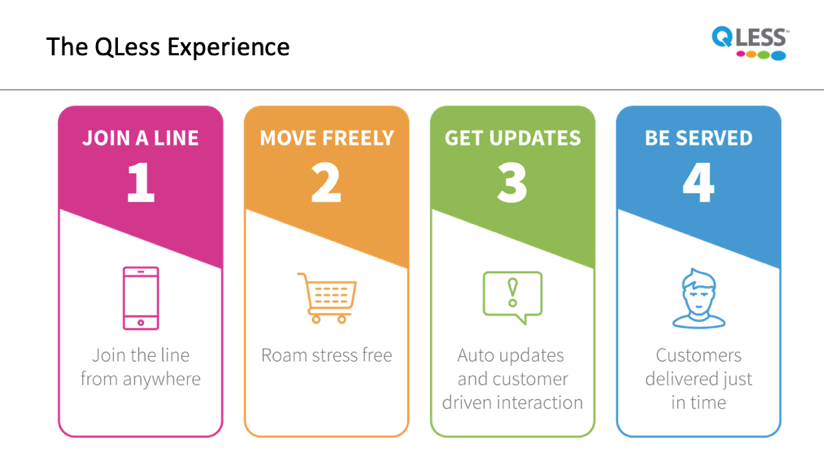 Universities, state DMVs, and other groups across the country use QLess. For example, Michigan’s Secretary of State (SOS), which provides DMV services, uses QLess with great success. QLess touts that one DMV it worked with (not in California) was able to significantly reduce wait times—doubling customer satisfaction—and increase staff productivity and morale. The number of people served increased by 50 percent after implementing QLess’s product, and the number of no-shows dropped by 35 percent.

The following figure shows that QLess has helped to reduce the time it takes for a customer to join a queue since QLess was implemented in Oakland County, Michigan, located northwest of Detroit. For every method of joining a queue, phone (QLess app), in-person ticket, or remote (website, call, or text message), wait times dropped during the three-year period. Clearly, after implementing QLess, the customer experience improved for every method of joining a DMV line. 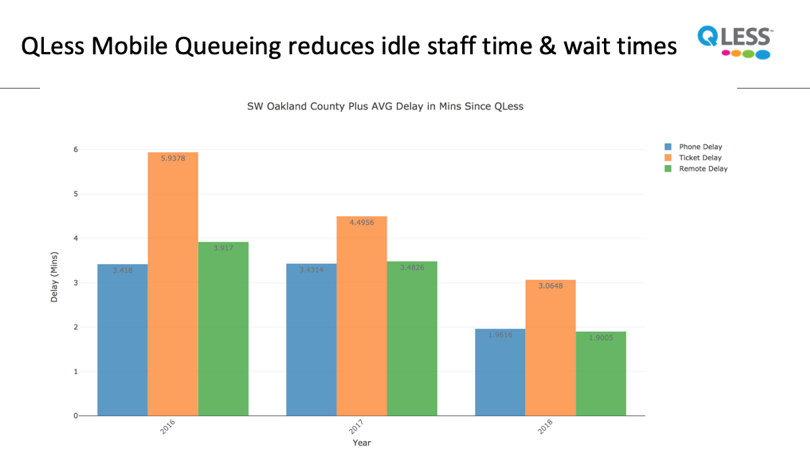 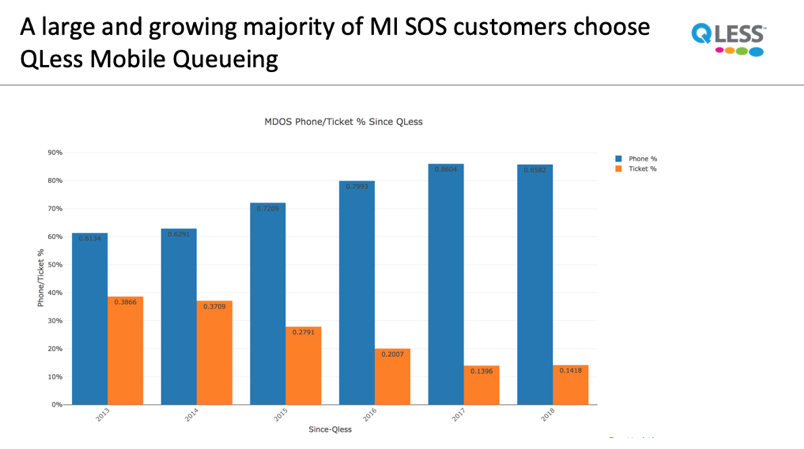 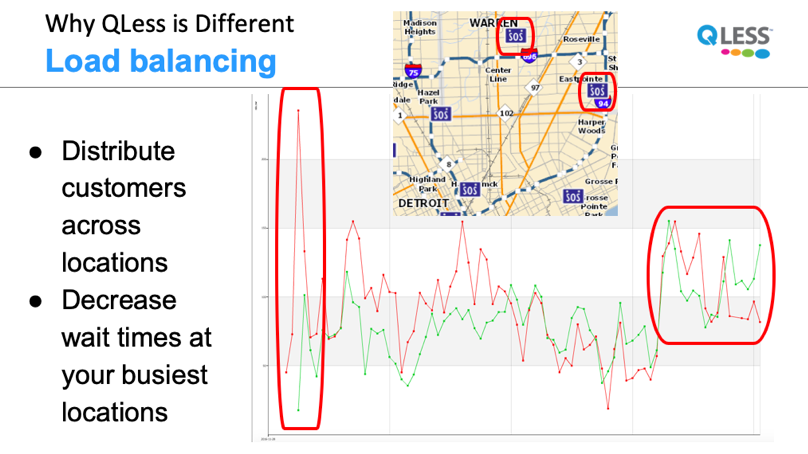 Overall, QLess allows customers to wait for their DMV turn at the best location for them without having to be physically present during the entire waiting period. This reduces crowding, in-office wait times, and potential operational costs as well since customers would use their own mobile devices. There are other companies that provide mobile queuing apps as well, such as QueuePad and Skiplino.

The California DMV has been slow and reluctant to integrate new technology into its operations to improve customer service. Instead of partnering with tech companies to help reduce wait times and long lines, the DMV has asked for more taxpayer money to solve the problem. In January 2019, the DMV submitted a special budget request of $40 million, in addition to the $1.2 billion it already receives each year. The DMV threatened a “return of unacceptable field office wait times” if it does not receive the additional taxpayer money. But throwing more money at a broken system will not fix the problem, as we have already learned from past California DMV budget increases.

About 23 million Californians will be going to the DMV to obtain their federally mandated Real ID cards no later than October 1, 2020. The DMV must become more efficient and innovative if it hopes to properly accommodate this surge in customers without experiencing total chaos.

An important recommendation from Newsom’s Strike Team should be to seamlessly integrate proven technology into its operations, rather than throwing more taxpayer money at the problem. Over the long term, however, DMV branch offices should be run by competing, cutting-edge private vendors. The vast government DMV monopoly should end.