Now that 2018 is over, how did your state’s governor do on their fiscal policy report card?

If you want the details, and you should definitely check out your state governor’s report card to find out why they earned the grade they were given, please click over to the Cato Institute’s Fiscal Policy Report Card on America’s Governors 2018. However, if you want to see their overall grade, Chris Edwards’ reveals that just five of fifty earned an “A”, 11 earned a “B”, only 5 earned a “C” average, 14 were below average with a “D”, and eight flunked altogether. 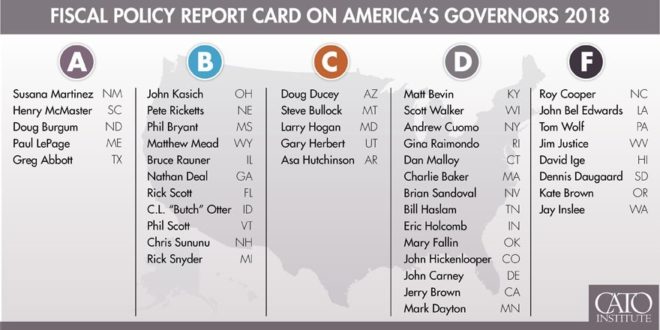 The Cato Institute’s 2018 fiscal policy report card provides grades for 43 governors, where seven states have governors who have only been on the job for a handful of months and haven’t yet established enough of a track record to be evaluated. The 43 governors whose fiscal policies were evaluated were judged on their spending, revenue and tax rate-related proposals and actions, with a total of seven variables in all being considered.

The highest rated governor in Cato’s 2018 fiscal report card was Susanna Martinez of New Mexico and the lowest rated was Jay Inslee of Washington. Any governors looking to improve their grade, and their state government’s fiscal condition, should review not just their scores but also the evaluations of their top and bottom performing peers!