Interest Due on U.S. National Debt Starts to Explode

This past year is one that will be remembered for many things, but perhaps the one thing for which it may someday be best remembered is that it was the year in which the amount of interest that the U.S. government had to pay on its total public debt outstanding began to break all its previous records.

Visual evidence for that fact is shown in the following chart, which indicates the gross and net amounts of interest that the U.S. Treasury Department reports have been paid from 1997 through 2018 in each of its fiscal year-end Monthly Treasury Statements for these years. 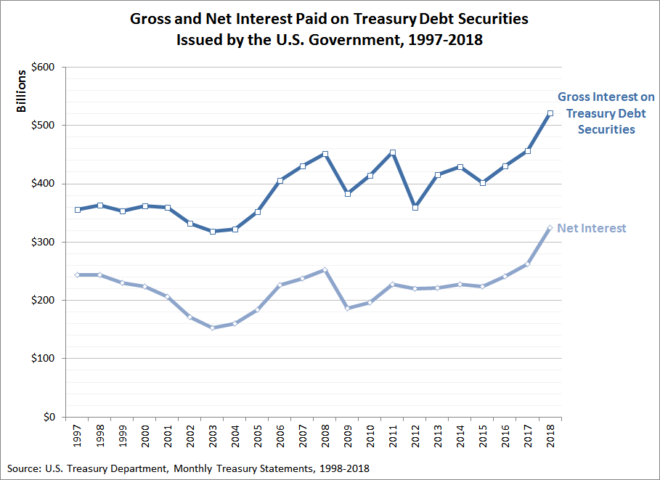 At $521.5 billion in 2018, the total amount of interest paid on debt securities issued by the U.S. government to all its creditors exceeds the national GDP, adjusted for purchasing price parity, of 187 countries. If you want to look at just the net amount of interest that the U.S. government pays on its national debt, at $324.7 billion, that amount exceeds the national GDP of 173 countries.

For both measures, the current trend that led to the records for the amount of interest paid on the U.S. total public debt outstanding began after 2015, which is when the U.S. Federal Reserve began its recent series of interest rate hikes. The following chart from the Fed shows the history of how it has set those interest rates from 1997 through 2018. 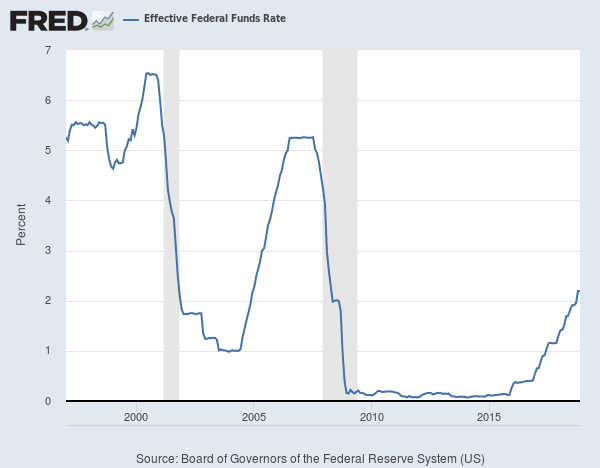 Those interest rates combine with the growth of the size of the national debt, which has itself exploded over the last two decades, and especially so in the last 10 years. Near-zero interest rates kept the size of the U.S. government’s interest payments relatively flat over much of this time when the amount of its debt skyrocketed, but with interest rates now rising, having to pay the bill for having racked up so much debt is becoming painful. 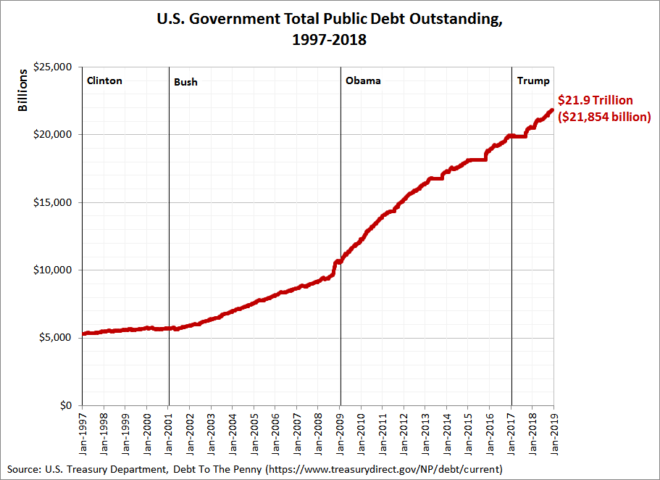 According to the Wall Street Journal, the growth of the interest due on its national debt has put the U.S. government onto a course where it will soon spend more on its debt than it does on defense.

A bipartisan majority of politicians in Washington D.C. deny that any of this is a problem, where they argue that they can either increase taxes or borrow more to fund their desired level of spending without restraint. In truth, the lesson from many other countries around the world where they have tested this theory is that there are limits to how much they can do of either, which will mean that the government’s debt payments will come to crowd out a good portion of the spending they want.

That is when the truly painful part of having so much debt will take hold.