The Silence of the Deficit Hawks

The U.S. government did something in August 2018 that it has never done before. It spent $433 billion in taxpayer and borrowed dollars in a single month! 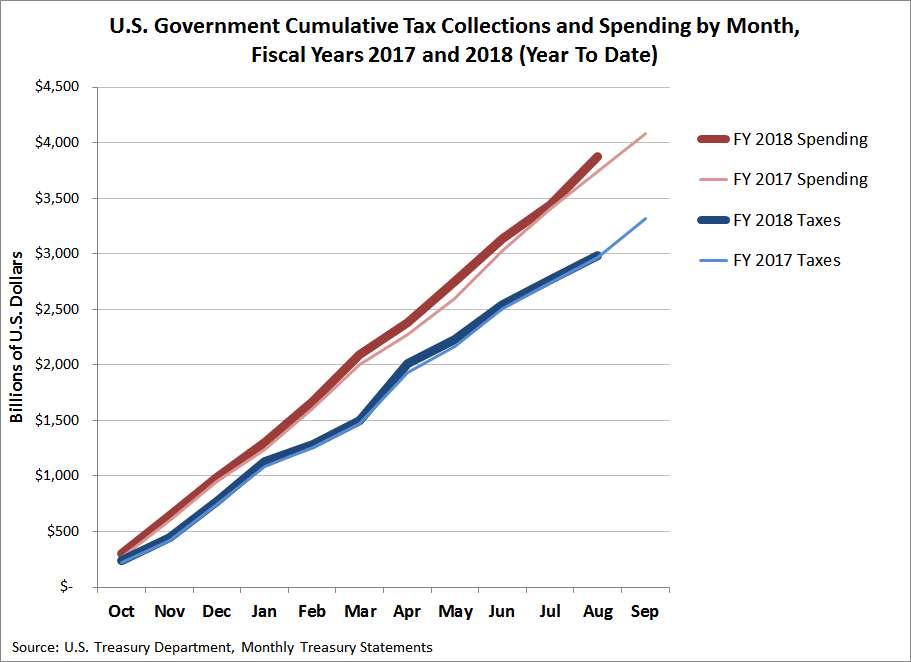 You might think this dubious fiscal achievement would attract howls of disapproval on Capitol Hill, but you would be wrong. According to reporting by Damian Paletta and Erica Werner of the Washington Post, there is bipartisan approval for spending even more money, with the only disagreements being over what.

The U.S. budget deficit is reaching levels that are abnormally high for a robust economy, and lawmakers from both parties are proposing ideas that would make the deficit swell even further. ...

Leading House Republicans proposed an additional $646 billion in tax cuts this week—a number that could grow to roughly $2 trillion over a decade—and a growing number of prominent Democrats have proposed expanding access to government-sponsored health care, which could add trillions more.

Writing in the op-ed portion of the Washington Post, senior congressional correspondent Paul Kane reports there are no longer any deficit hawks to be found in positions of power in Washington D.C., where those who previously did speak out for fiscal sanity are now silent.

The deficit hawks are dead.

Their demise technically came Tuesday when the Congressional Budget Office calculated the federal deficit at $895 billion for the first 11 months of fiscal 2018—a stunning gap that was met with a collective shrug on Capitol Hill.

But the real death of the deficit hawks came late last year and early this year, as Republicans such as House Speaker Paul D. Ryan (Wis.) who had railed against deficits in the first years of the Obama administration pushed through a massive tax cut despite CBO projections of a surge in federal borrowing.

Given possible high ground on the issue, Democrats have largely fielded a crop of candidates across the nation who have ignored, played down or outright rejected the significance of the still-growing deficits.

The Democrats have, across all factions of their party, lambasted the Republican tax-cut legislation of December and the $1.5 trillion shortfall it is estimated to leave in the budget over the next decade. But they have not attacked that as money that should go to the U.S. treasury to pay down the overall $21 trillion debt. Rather, they have almost universally pledged that the money be used for other federal spending, such as infrastructure or an expansion of the Affordable Care Act.

Real fiscal responsibility would mean restraining the growth of U.S. government spending to be less than the growth of its revenues, which is the only sound path toward achieving fiscal sustainability. Unfortunately, in today’s political environment, even though the government’s revenues from taxes are higher than they were last year, even with tax cuts, the U.S. government’s deficits are growing because it has increased its spending by even more.

Sadly, in the perverted math of Washington D.C. politicians and bureaucrats, more spending equals more power and control over the lives of ordinary Americans, so that is not likely to stop anytime soon. It won’t be fun when the bipartisan party comes to an end.