On May 31, 2018, the total public debt outstanding of the U.S. government stood at $21.145 trillion dollars. Of that amount, $1.211 trillion was borrowed so that Uncle Sam could be in the business of making student loans.

Over $1 trillion of that subtotal was borrowed after President Obama took over the student loan industry on March 30, 2010. 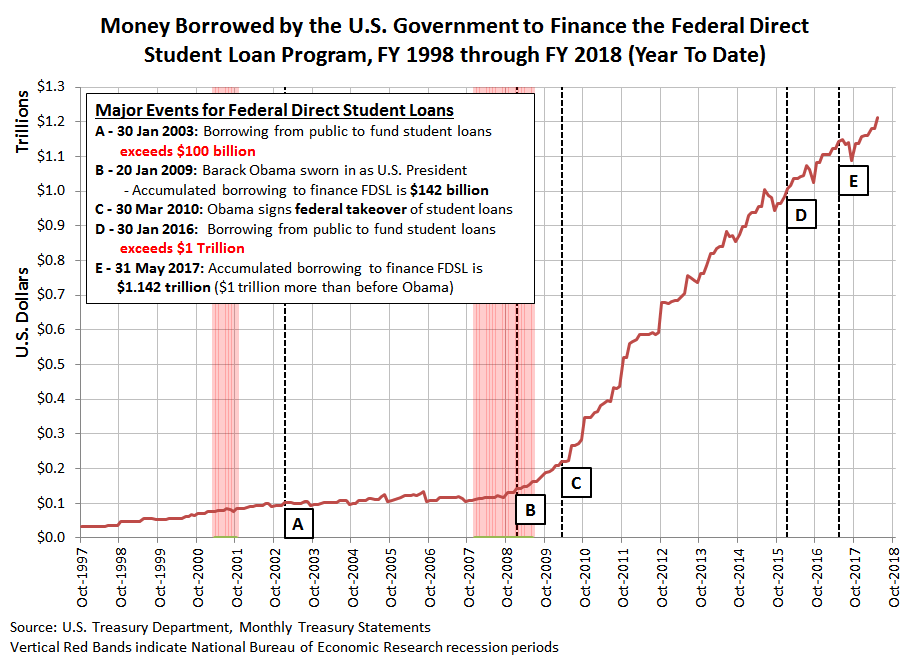 As trends go, the chart of the history of the U.S. government’s borrowing to fund student loans looks like an ugly hockey stick, the kind that can have negative implications for the population, particularly those Americans who have a crippling level of student loan debt.

So much so that a number of federal judges are now considering upending the laws written by Congress that make student loans largely exempt from being discharged in bankruptcy proceedings. These laws make it nearly impossible for recipients of Federal Direct Student Loans to gain relief from the burden of their having borrowed money from the U.S. government.

For decades, bankruptcy judges refused to consider reducing student loans. That is now changing, and some judges are throwing lifelines to people struggling to repay their debt.

In interviews with the Wall Street Journal, more than 50 current and former bankruptcy judges, frustrated at seeing borrowers leave federal courtrooms with six-figure debts, say they or their colleagues are more open to chipping away at the decades-old guidelines that determine how such debt is treated.

“If the law’s not going to be improved by Congress, we have to help these young people who are drowning in student loan debt,” said U.S. Bankruptcy Court Judge John Waites in South Carolina.

The articles go on to describe a number of remedies that U.S. judges are trying out, which are summarized in the following list:

While many of these judicial debt-relief strategies provide some benefit to those who have gone through the courts, by and large, the effects represent only a trivial nibbling around the edges of a much, much bigger problem.

The bigger problem is that the U.S. government is in the business of making student loans in the first place, where it has cumulatively borrowed more than a trillion dollars to be in that business. Because of its own massive borrowing, Uncle Sam cannot afford to let many student loan borrowers off the federal hook.

That’s why when the government has provided relief to its stressed student loan borrowers, it has done so in the form of income-based repayment plans, which trade regular student loan payments for what amounts to a special additional income tax levied on the borrower.

There is a solution. The U.S. government can return the student loan business to the private sector, allowing lenders and academic institutions to assume the primary risks for when their students might default on their loans.

At the same time, Congress should rewrite the nation’s laws to once again make student loans fully dischargeable through bankruptcy proceedings. Just like almost every other kind of debt.

Until it does, that ugly hockey stick is only going to get uglier.