The Gender Gap: Discrimination or Choice? 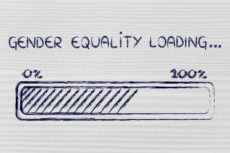 If you were to learn that the way to achieve gender wage parity is to build a less gender-equal society, would you be in favor of it? Two recent studies provide strong evidence that the wage gap between men and women has little to do with gender discrimination and everything to do with women being free to discriminate in how they spend their time.

The first, “The Gender Earnings Gap in the Gig Economy: Evidence from over a Million Rideshare Drivers,” draws on detailed information from a million Uber rideshares and finds a roughly 7% gender earnings gap between men and women drivers. As all decisions reside in the hands of the drivers themselves, clearly employer or consumer discrimination can not account for the gap. The study’s authors conclude:

We find that the entire gender gap is caused by three factors: experience on the platform (learning-by-doing), preferences over where/when to work, and preferences for driving speed. This suggests that, as the gig economy grows and brings more flexibility in employment, women’s relatively high opportunity cost of non-paid-work time and gender-based preference differences can perpetuate a gender earnings gap even in the absence of discrimination.

The second study, “The Gender-Equality Paradox in Science, Technology, Engineering, and Mathematics Education,” looks across 67 countries and regions and finds that, on average, girls do as well on tests for science as boys, and in almost every country girls would do as well as boys in college-level math and science courses—were they to take them.

However, the paper also shows that in countries in which girls have greater choice and face less discrimination, there are fewer women in STEM.

That is: greater gender equality produces fewer women in STEM.

The reason has to do with choice. While the average girl is as good in science as the average boy, she is even stronger in reading:

Across all countries, 24 percent of girls had science as their best subject, 25 percent of girls’ strength was math, and 51 percent excelled in reading. For boys, the percentages were 38 for science, 42 for math, and 20 for reading. And the more gender-equal the country, as measured by the World Economic Forum’s Global Gender Gap Index, the larger this gap between boys and girls in having science as their best subject.

The study’s authors posit that countries with the greatest gender inequality produce more female graduates in STEM because women in those countries face less certain economic futures and thus choose careers in fields providing greater financial security. In countries in which women have more choice, as well as greater financial security, they are more likely to choose careers that provide less financial rewards. That is, they are choosing quality of life in pursuing fields that they enjoy more, vs. greater economic reward.

When the study authors looked at the “overall life satisfaction” rating of each country—a measure of economic opportunity and hardship—they found that gender-equal countries had more life satisfaction. The life-satisfaction ranking explained 35 percent of the variation between gender equality and women’s participation in STEM. That correlation echoes past research showing that the genders are actually more segregated by field of study in more economically developed places.

So social engineers and companies singularly focused on creating a workforce comprised of equal representation from among the population—i.e., given a workforce that is statistically 66% male and 55% female, one’s employees should be 66% male and 55% female (“reporting differences” account for this totaling > 100%)—face a dilemma: to truly achieve gender “equity,” they should be pushing for national policies that would produce greater gender discrimination.

In other words, if our goal is equal representation of women in STEM, we need to become a society in which women have fewer choices, and withdraw social programs that provide financial security. Think Turkey and the United Arab Emirates.

Otherwise, we need to reject simple-minded reasoning that tries to measure social value in money or body counts. A truly equitable society is one in which individuals are free to make their own choices.