Unsung Heroes of the Market 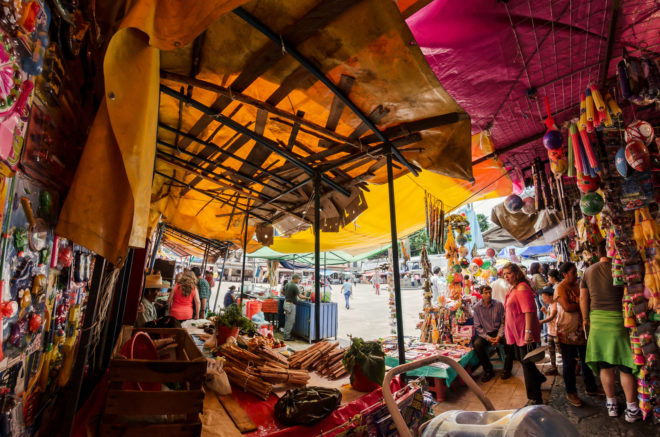 I live in a very remote place, even by Mexican standards. The nearest fair-sized city, Chetumal, is about 125 miles away, and one needs about two and a half hours or more to get there by car. Nearby shopping is extremely limited. A few grocery items may be purchased in the village of Xcalak. The closest gas station is in Mahahual, about 43 miles from my house, where one may also buy hardware and building supplies. Living here in Xcalak would be a very Spartan experience were it not for Lucio, from whom I buy fresh produce and other foodstuffs three times each week at my gate (and for another grocery seller, who comes on the days when Lucio does not).

Lucio lives in Bacalar, a town about a hundred miles away. Three times each week he rises at 4:00 a.m. and goes to the New Market in Chetumal, where he buys a fairly extensive variety of foodstuffs. He then hauls them to Xcalak and peddles them in the village and along the beach road where I live. He usually arrives at my gate around noon. If we want something he does not ordinarily sell, we ask him to bring it, and he usually manages to do so on his next trip. He is a keen merchant: he quickly learns what items one is interested in buying, and he remembers items he hasn’t been able to get recently and calls them to the customer’s attention when he has them again. He conducts this trade from a pickup truck that is far from the latest model, and whenever he fails to come as usual—which is a rare occurrence—it is always because the truck has broken down. As a rule he is extraordinarily reliable and punctual. (The latter is not something always on display in the land of “Mexico time.”)

I have written from time to time at The Beacon about the amazing goods I have bought from him, goods that originate in many cases thousands of miles away. It is not uncommon, for example, for Lucio to bring cantaloupes or grapes that were grown in California’s San Joaquin Valley, where I grew up. He sometimes has strawberries from the Watsonville area of California. Right now, I am consuming green, seedless grapes from Peru and nectarines from Chile. I like to imagine all the people who have contributed in the long series of stages that stretch from the time a farmer undertakes to plant a particular crop: the people who supply him with inputs, lend him money, purchase his outputs, and transport them in many cases thousands of miles by various modes of transportation, people who likewise rely on input suppliers for fuel and the services of ships, airplanes, trains, and trucks; people who after a series of transactions that pass the goods from one middleman to another finally put them in Lucio’s enterprising hands, from which I acquire them and—at the very end of the long, complex chain—consume them with pleasure. Remarkably, the items Lucio sells me arrive in good shape despite their long trips to reach me. He does not bring poor-quality goods.

Now, you may be thinking: why are you going on and on about such utterly mundane transactions? Why are you celebrating this Lucio guy, who after all is pretty much the same as countless millions of other merchants around the world? But that mundaneness, mis amigos, is precisely the point. We have all come to take for granted the multitude of producers and middlemen who make the markets work for the enjoyment, and often for the very survival, of billions of consumers in every part of the world. If this indescribably complex global process of production and exchange, all carried out spontaneously by people who find one small part of it worth their undertaking, is not a miracle, then what is a miracle?

So say what you will about my hero Lucio. He makes life enormously easier and better for me and my wife, as he does for my neighbors in this remote place, and he does not get rich in the process. He works very hard and very responsibly for a return that may bring his family a modest middle-class living by Mexican standards, if that much. He bears the risks of buying goods without being guaranteed a sale later on. He endures long, thrice-weekly trips on (in places) dangerous or punishing roads. He grins and bears the extortionate mordidas of local officials who extract their pounds of flesh just because they can. And he keeps going, and going, and going—he’s a veritable Energizer bunny of produce supply. Call him what you will; I call him a hero.

So, let us raise a glass to Lucio, and to the millions like him throughout the world. Peace is better than war; prosperity is better than poverty; commerce is better than conflict; and people like Lucio make the good things of material life possible. After all, the actions that go into a worldwide market order don’t just happen; individual entrepreneurs have to make them happen. They deserve all the celebration we can give them.