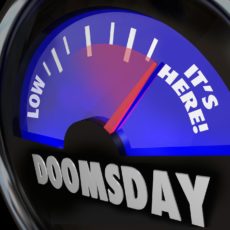 The recent federal tax cut is creating a lot of fear and angst that a quick historical survey would go far to allay.

Consider, for example, this recent opinion piece by two officials of the Council of Nonprofits, “Nonprofits Must Move Swiftly to Fight for Sound Public Policies.” Characterizing the tax bill as unleashing a “destructive tsunami,” they go on to predict:

as governments at all levels are forced to cut spending, more work will fall on nonprofits to help people hurt by the spending reductions. Expect nonprofits to have to seek more money from foundations to cover those costs—think of it as a new tax on philanthropy to subsidize decisions of politicians.

Swamped by the legend that World War II ended the Great Depression are the facts that the U.S. domestic economy remained mired in depression until 1946—after the war had ended. The single measure by which many conclude that the Depression ended with the war is unemployment—which not surprisingly declined from a high of 9-15% in 1940, to 1.2% in 1944, when 16 million Americans were “employed” by the military. Those left at home continued to suffer low standards of living including rationing of almost everything, the pain of which was likely eased by the “spirit” of shared privation for the war effort.

It was only at the end of the war that the Depression truly ended, when following the death of FDR Truman abandoned New Deal economic policies and slashed federal spending by 40%. Despite warnings from his economic advisors that this would plunge the economy “back” into Depression, the U.S. economy instead boomed, easily absorbing the 10 million newly “unemployed” released from the military.

Those returning G.I.s were also able to become homeowners, thanks to the efforts of my father Willard Garvey (himself newly returned from war) and others like him who built millions of cheap starter homes for the Baby Boomers’ parents.

If the lesson of the 1950s is any guide, “governments at all levels ... forced to cut spending” is thus a recipe for prosperity, not impoverishment.

It’s also unfortunate that non-profit officials should not appreciate the leveraged power of Americans’ being able to keep more of their own money and direct it to competitive, private philanthropic, non-profit, and for-profit benevolent initiatives. Estimates on getting the same the benefit from spending $1 in the private sector range from $1.63 – 1.92 in spending by the government.

They would also hopefully take away some strong impressions from a study of the rich tradition of mutual aid and benevolent societies that provided health care, education, unemployment and life insurance prior to the growth of the welfare state. Government’s crowding out these incredibly effective organizations has also resulted in today’s poor increasingly caught in a vicious cycle of dependency, with inter-generational patterns of poverty unknown previously—contrasted against the role private associations played in helping individuals and families get on their feet from temporary set-backs. This corruption of a well-developed private sector as well as of a culture that resisted dependency resulted in an explosion of the welfare rolls despite a massive decline in the poverty rate over the twentieth century.

If these philanthropic officials truly want to help, they ought also take a look at the pervasive barriers to opportunity as well as the tremendous costs disproportionately placed on the poor by all levels of government. Minimum wage laws have resulted in the elimination of or substitution of technology for entry-level jobs, effectively removing the bottom rung of the economic ladder, while occupational licensing laws protect those who can afford them from competition from the less well-off. In the 1950s, one out of 20 U.S. workers were required to obtain a government license. Today that number is nearly one out of every three workers, disproportionately excluding the poor from jobs.

At the same time, government’s involvement in the economy has dramatically increased the cost of necessities such as housing and energy. Government restrictions and fees on building have resulted in a dearth of housing, ironically driving out all but the very rich from the most “progressive” cities—with building policies that match—such as San Francisco and Seattle. Millennial-led movements such as YIMBY (Yes In My Backyard) are calling for an end to all such restrictions and a return to homebuilding heydays such as my dad’s postwar operations.

The costs of the climate change war against cheap fuel also disproportionately falls on the poor. Tax-paid subsidies for installing solar panels go to the rich, while rising costs of home energy hit those already struggling:

Economists consider households energy poor if they spend 10% of their income to cover energy costs. A recent report from the International Energy Agency shows that more than 30 million Americans live in households that are energy poor—a number that is significantly increased by climate policies that require Americans to consume expensive green energy from subsidized solar panels and wind turbines.

The “sound public policies” these nonprofit officials ought actually be calling for are thus a Government Cut at least commensurate with the Tax Cut. Phasing out perverse government entitlement programs, eliminating barriers to economic opportunity, and freeing markets for the provision of life’s necessities could usher in a new era of opportunity and prosperity—and one that would especially benefit the poor.