My Interview with Lenin, One Hundred Years after the Revolution 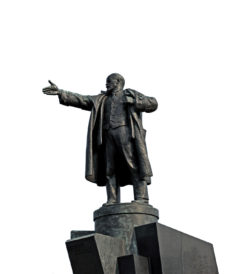 The mysteries of science have preserved Lenin alive, whose “death” in 1924 was a cunning scheme. I have managed to track him down to talk about the one hundredth anniversary of the Bolshevik Revolution.

Me: What does the “October Revolution” say to us today?

Lenin: The vanquished were right. History has sent the Provisional Government to the dustbin of history as well as Kerensky, its last boss. But I admit that the best of Russia was in the Provisional Government: liberals and socialists who had fought the Tsar and wanted reforms. There were even some lucid Mensheviks. If liberals like Prince Lvov, moderate social revolutionaries like Kerensky or Mensheviks like Tsereteli, who were in favor of a Constituent Assembly and moderate reforms, had triumphed, Russia would be different country.

Me: Your country was torn apart and became ungovernable. The Bolsheviks, who were not even a majority in the Russian Social-Democratic Workers Party, destroyed the Provisional Government.

Lenin: Our victory was not the brainchild of my genius or of the mediocrity of our adversaries. It was the result of my fanaticism, both ideological and strategic, and the Great War. The chaos and the commotion enabled us, who knew what we wanted and were prepared to do anything, to become strong. Fanaticism means being willing to do everything, even contradict oneself, to reach the goal.

Me: You applied the Red Terror and War Communism. With the former you consolidated your power; the latter failed and then you had to apply the New Economic Policy with capitalist elements.

Lenin: I had half-accepted the thesis that communism was possible in Russia without going through capitalism first. But I understood that some economic development must take place before applying socialism. The conditions for taking power were in place even if full industrial development had not yet occurred. When I overthrew the Provisional Government, I applied War Communism to control power. When I felt safe, I relaxed economic centralism: I knew that the peasants, a majority of Russians despite some industrialization, wanted to sell their surpluses and keep ownership of the lands they had taken from the oligarchy.

Me: But in that short period there were already signs of what would become the great economic lesson of the twentieth century: the failure of socialism and the triumph of markets.

Lenin: Yes. I have not renounced the idea that, in a future that now seems utopian, humanity will find a way to install socialism without killing the goose that lays the golden egg, which is capitalism. Stalin later sowed the germ of the destruction of the USSR when he began to apply his five-year collectivist plans.

Me: Do you buy the thesis that Trostsky was a “better” communist because he confronted Stalin?

Me: Communism killed one hundred million: more than twenty in Russia, sixty-five in China, one in Eastern Europe, two in Cambodia, two in Vietnam, two in North Korea, two in Africa, one and a half in Afghanistan, fifty thousand people in Latin America ...

Lenin: No man can contemplate his responsibility in such a tragedy without losing his mind or committing suicide. My survival mechanism is to bear the daily punishment of seeing that history has buried my work in ignominy.

Me: Is populism today the greatest danger?

Lenin: You forget that Russia invented populism in the second half of the nineteenth century. The populists (“Narodniks”) inaugurated our revolutionary tradition and subsequently morphed into terrorists. My brother, who was hanged by the authorities, was one of them. Then the socialists of different currents took over from them. Populism is the origin of the Russian tragedy.