A Few Thoughts on Catalonia 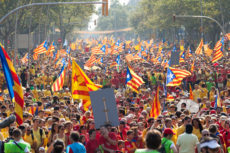 The Catalan independence movement has drawn some support among libertarians.

From a theoretical standpoint, any group’s attempt to break away from a larger political entity is hard to argue with. Ultimately, though, the principle of self-determination, taken to its logical extreme, would mean dissolving the state and replacing it with voluntary associations. Which is why some classical liberals have taken a more limited view of self-determination.

Ludwig von Mises, for instance, argued in Liberalism that the only defensible self-determination was that of individuals, not nations, and since it is impracticable on technical grounds, it is necessary to accept the will of the majority in a given territory.

Whatever one’s position, when considering the Catalan issue one should take into account that the region’s nationalist movement places a collectivist notion, the “Catalan nation”, above individual rights. The majority of Catalans, who oppose independence, believe that their individual rights are protected by the Spanish constitution and the system of “autonomous communities” put in place, and approved in a referendum, during the transition from dictatorship to liberal democracy. Those were not perfect documents by any means. The financial arrangements that sustain the system of autonomous communities, for example, should be more decentralized and give Spaniards much more power over how their taxes are collected and spent. But compared to any other time in its history, Spain’s liberal democracy gives its citizens a significant measure of freedom.

For a libertarian, it will never be enough, but for millions of Catalans who would like the system of autonomous communities, which by international standards is significantly decentralized, just remaining in Spain is a better option than allowing a group of nationalists to unilaterally break away and impose on them the highly statist policies that Catalan nationalist parties stand for (and the violent methods used by some nationalist organizations).

These Catalans look, for instance, at the public education system, which is controlled by the autonomous communities and in the case of Catalonia has become a tool of suffocating nationalist indoctrination, or at the use of the powerful Catalan government-controlled media, and they associate independence with less, not more, freedom. Of course, nationalist governments have been elected by Catalan voters throughout the years; however, at the time they did not stand for independence but for further, negotiated, decentralization. For many Catalans opposed to independence, the highly interventionist education system that excluded teaching any subject in the Spanish language was problematic, but they accepted it as a price for remaining in a place to which they have longstanding attachments. Many among them were intimidated by a very aggressive environment and could not fight back.

Some libertarians argue that putting the Spanish constitution before Catalan self-determination is to give preeminence to a Spanish nation-state that is the result of historical abuses of power. The same thing can be said of all states. But, unless one is making a libertarian case for getting rid of the state, it must be noted that today’s Spain is also the result of a historical evolution from state violence to a liberal democracy that protects many freedoms and individual rights (including the right to learn Catalan). So the choice is not between an almighty Spanish nation-state and Catalan self-determination, but between a Spanish liberal democracy where change can take place peacefully (and has a long way to go, in terms of decentralizing power, before it can fully satisfy libertarians) and a nationalist creation, the Catalan state, that will set back the freedoms of the citizens of that region in several respects.

Personal self-determination is a right that any individual can exercise by leaving Spain (or Catalonia). From a libertarian perspective, that is not enough since one should have the right to free oneself from state rule without having to migrate. But what the Catalonian nationalists are fighting for has little to do with individual self-determination. In Spain’s multilingual environment, many regional languages, including Catalan, have prospered in recent decades. Under nationalist Catalan rule, those who wanted to speak another language, including Spanish, would have an impossible time. Can we blame millions of Catalans for believing their individual rights are more protected by remaining under the Spanish constitution?

Perhaps the day will come when individual self-determination will be feasible (and Mises’s “technical” problems can be overcome). But for the moment it is unrealistic to think that the Catalan nationalist movement will turn into a Misesian movement in favor of individual self-determination. For now, a better cause for libertarians to rally around than Catalan nationalism is replacement of the Spanish welfare state with a liberal order and decentralizing the financial system underpinning the system of autonomous communities much more.