A Plea to My Male (and Female) Colleagues in Economics 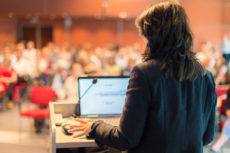 In a recent blog post, Jeffrey R. Brown, a Professor of Business and Dean at the College of Business at the University of Illinois Urbana-Champaign, published a “public plea” to his “male senior colleagues in economics.” In the post, he references the research of an undergraduate student who looked at the words used to describe male and female economists on a popular gossip site for economists—one that Berkeley economist David Romer referred to as a “cesspool.” (Brown agrees with that descriptor, as do I.)

Brown goes on to suggest that there are things that economists can do—particularly senior male economists (by “senior” he means they have tenure). Below are some of his points. Please note: I have edited his points for length. This is not the entirety of his list.

I have never met Professor Brown, but he seems to be genuinely concerned about women in the profession. From looking at his curriculum vitae and popular writing, he’s clearly an accomplished economist and I value his perspective. Indeed, I agree with him on several of these points. (I am not sure that I agree about some of the recent concerns, from Brown and others, about the “hostility” toward women in economics. Perhaps I’ll discuss this more at a different time.)

For instance, I agree that if more male economists talked with their female coworkers, they would absolutely be surprised by some of our experiences. While my current male colleagues and those I encountered in graduate school were/have never been inappropriate, I have been on the receiving end of remarks and behavior by men in the profession which would certainly qualify as inappropriate. In other cases it would have been legitimately categorized as sexual harassment. I have had people directly question me about how much of the work I “actually” do with my frequent (male) coauthor–something remarkably insulting to the both of us. I know that other women have similar experiences.

I also agree that academics should consciously cultivate a supportive departmental culture. It’s good for research and it’s good for our students. That said, taking an intellectual beating when presenting your research is par for the course if you’re an academic. If you don’t have a thick skin, journal editors and referees, administrators, and even students can make your life difficult. If you can’t take the heat, stay out of the kitchen.

I think that mentoring programs are fantastic, for both men and women. Of course, I cannot agree more with his 8th point. Had I not been encouraged by my undergraduate mentors (one was male and one was female), I would never have considered graduate school, much less pursued it. It was their encouragement, their insistence that I could handle the work that gave me the needed confidence to go into a PhD program.

While I agree with him on these points, I must part ways with him elsewhere. While I believe his suggestions are sincere and well intentioned, I must respectfully—and strongly—disagree. As I often tell my students, intentions don’t drive outcomes. I think some of his suggestions may not only be fruitless in creating a more inclusive field for women, but would genuinely harm female economists.

Points 2-4 are the most problematic from my perspective. Professor Brown suggests that male colleagues should actively seek to include female economists in conference panels, as discussants, and to consider “unconscious biases” against women in hiring decisions. Allow me to be blunt.

Please do not add female economists to panels or consider someone’s gender when making employment decisions.

I don’t mean that women shouldn’t be included in the profession. (To do so would be to suggest myself out of a job.) I do mean, however, that decisions regarding who to invite to conference panels, research colloquia, etc., should be based on things like professional reputation and the quality of an individual’s work. It should have nothing to do with gender. In a similar way, gender should have absolutely no bearing whatsoever in interviews, hiring, and (especially) tenure decisions—I say this as an untenured, but tenure-track, female economist.

To include gender in these decisions effectively cheapens the contributions of all female economists. When I am invited to participate in a conference panel, a research colloquium, or review a manuscript, I know that those invitations are being extended because the host or editor respects my work and ideas. When I’m asked to speak at summer seminars, give lectures, or lead discussion groups at colleges and universities, it’s because those institutions are interested in my research and my perspective. To encourage male economists to extend invitations to women for the sake of inclusion casts doubt on my credibility. Instead of people focusing on my work, they may wonder if I was invited to “fill a quota.” Was I invited to speak on a topic because my research is relevant or because I contribute to “inclusivity?”

In addition to downplaying the abilities of women as scholars, such suggestions have other implications as well. These suggestions send the signal to women and to men in the profession that we (women) cannot take care of ourselves. We need our male colleagues to do it for us.

In fact, there were times when my male colleagues, upon witnessing inappropriate behavior directed toward me, spoke up or otherwise assisted. I appreciate that they cared. That said, had these friends and colleagues not been present, I was, and I am, fully capable of handling myself.

I am in a position now where some of my former undergraduate students are pursuing graduate degrees, including two women. They are curious, conscientious, and incredibly smart. Without a doubt I have a vested interest in their success and believe in their abilities not just succeed, but to dominate their programs. Suggestions like the ones in the aforementioned blog send the signal to these ladies and others that we are incapable of letting our talents and our work speak for themselves—what an absolutely terrible message to send to female scholars, especially young ones!

I appreciate diversity. Indeed, multiple perspectives make for some of the best research and collaborative partnerships. Diversity in the classroom and in research, whether on the basis of gender, sexual orientation, race, religion, political affiliation, or methodology, is a powerful teaching tool and helps students and scholars to think critically about ideas. But suggesting that female economists be included because they are female is damaging and counterproductive.

Whether I fail or succeed as an academic, I want to be judged by my scholarly contributions and my competency in the classroom. I want to be included because my work is valuable and moves conversations forward—not because I happen to be born with two “X” chromosomes.

So, here’s my plea to all my colleagues in economics. Be open to others who aren’t like you. Actively engage with those who are diverse. Remember that our jobs as teachers and scholars is to continuously learn, to teach exceptionally, and produce work that advances our disciplines. Please, don’t treat me differently because of my gender. Value my work, not my anatomical makeup.

Treat me, treat other women, and treat everyone else as what we are—colleagues.