Atomic Bombs: What My Momma (Never) Told Me 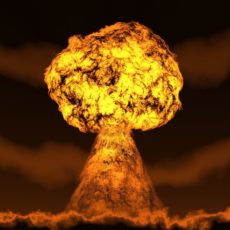 Some 72 years ago this month, the United States dropped atomic bombs on Hiroshima and Nagasaki, Japan. An estimated 60,000 to 80,000 people were killed instantly in Hiroshima and another 40,000 were immediately killed when Nagasaki was bombed. In the coming days, weeks, months, and years, thousands more would die as a result of the blast, many from the effects of radiation.

I remember the first time I learned about the dropping of the atomic bombs—likely because I thought I was in trouble.

I was six and in the first grade. I remember going to the school’s library and walking into the “big kid” section. While I thought myself too mature for the likes of Clifford the Big Red Dog and life lessons offered by the Bearenstain Bears, I was enticed by illustrations, which led me to a particular selection. The book was Hiroshima No Pika (which I believe translates to “The flash of Hiroshima”) by Toshi Maruki.

The story follows the life of a fictional seven-year-old girl named Mii, who lived in Hiroshima with her mother and father. The family is tending to breakfast when the bomb is dropped. In the narrative that follows, Mii’s father is badly injured in the blast and ensuing fire. She encounters a swallow that unable to fly because its wings have been burned and a dead cat. They find a woman clinging to her lifeless infant by the river and watch as she ultimately commits suicide by walking into the water.

Mii never grows taller as a result of the blast. Despite surviving his initial injuries, Mii’s father dies months later of radiation sickness after losing his hair and suffering from painful skin blisters.

The story concludes by discussing the annual memorial in Hiroshima in which the people of the city write names of loved ones on lanterns and set them afloat in the rivers.

The book’s illustrations are as powerful as the text. Many of the characters are drawn naked, their clothes burned away in the aftermath of the explosion.

Disturbed by the book’s content, I took it to my mother. I had questions. Serious questions. Was this true? Did “we” (the United States) really do this to people like Mii and her family? As tactfully as she could, she explained that, indeed, the United States had dropped atomic bombs on Japan. People died, including children and (more upsetting to me as a child) their parents. True to nature, I asked a follow up question.

I remember my mother’s answer. She told me that the Japanese wouldn’t surrender and end the war. She said that dropping the bombs was the “only way” to get them to stop.

I went to school the next day with the book in my backpack and a note to my teacher. Needless to say, my parents were not pleased that they had to explain atomic warfare to their six-year-old and discuss the broad idea of radiation poisoning. They also weren’t pleased about the book’s graphics. Naked dead people was a far cry from the the likes of the Care Bears. (Strangely enough, we weren’t allowed in that section of the library until the 5th grade after that incident. This episode also taught me to keep my literary “contraband” to myself—and I realized that I had to get it from the public library. This was much easier said than done under the eyes of my mom. “What are you reading, Abby?” became a common question.)

I have not asked my mother as an adult if she believes that the bombs were the “only way” to get the Japanese to surrender. Regardless of her opinion, many people believe this to be true. Indeed, this is the dominant narrative surrounding the decisions to drop the atomic bombs. If the United States hadn’t dropped the bombs, so the story goes, the Japanese would have continued fighting and hundreds of thousands of Americans would have been killed when the U.S. invaded Japan, an event scheduled for November of 1945.

Others on this blog have rightfully doubted this justification. It was abundantly clear to all parties involved that Japan was losing the war. In fact, the Japanese were seriously considering surrender, but wanted to retain their emperor—which they ultimately did. (MacArthur actually used the emperor’s social importance to achieve his ends during the subsequent occupation of Japan. See Chris Coyne’s After War for a good discussion.)

The often-cited number of would-be American casualties is likely highly inflated. People often suggest that half a million servicemen would have died had the U.S. invaded Japan. While we will never know for sure, the government’s own estimates from the period show much smaller casualty estimates. Scholars believe an invasion would have resulted in anywhere from 20,000 to 50,000 casualties.

The bombings of Hiroshima and Nagasaki bring up many questions. I think it is telling, however, that 72 years after the bombings, the narrative put forward by the U.S. government continues to be viewed as fact. This type of “public relations” continues to be used by officials on a regular basis to garner support for what may otherwise be unpopular policy.

What is frequently absent from discussions of the bombings, issues of “necessity” and potential American casualties aside, is that most of those killed were not members of the Japanese military—but innocent civilians. By portraying the bombing as necessary to end the war, the U.S. government seeks to absolve itself from accepting the murder of thousands of men, women, and children. This article from Foreign Policy, written just last year, highlights the disconnect between the standard narrative regarding Hiroshima and Nagasaki and the known reality.

Gen. Bonner Fellers, MacArthur’s chief advisor on psychological warfare, wrote in a June 17, 1945, internal memorandum that the air war on Japan was “one of the most ruthless and barbaric killings of noncombatants in all of history.” And Gen. Curtis Le May callously described the victims of the March air raid as being “scorched and boiled and baked to death.” Consider a few more statistics. The total number of U.S. military deaths in the Pacific war was slightly more than 106,000. The atomic bombings of Hiroshima and Nagasaki alone killed roughly three times that number of civilian noncombatants.

By portraying the actions of the U.S. in Hiroshima and Nagasaki as necessary, even honorable, the U.S. government is able to effectively wash its hands of any wrongdoing. Americans are able to discuss the bombing without wanting to lower their voices, eyes, and faces. When I was taught about the events at the conclusion of WWII later in school, there was little to no mention of the civilian deaths, the nefarious impacts of radiation, or the fact that the Japanese were ready to surrender prior to the bombings. These lessons stood in stark contrast to the story of Mii I had read years before. In vibrant color and pithy language, it had taught me to remember what is often forgotten—or intentionally neglected—that war is nasty, brutal, and destructive at its core. Those who bear the consequences are not always those in uniform, on warships, or in tanks, but seven-year-old girls.