College: Investment in the American Dream or an Escape from Reality? 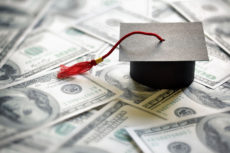 These days it seems college is about everything but higher learning.

Undergraduates enrolled in a Global Politics of Human Rights course at Arizona State University’s Tempe campus, for example, were allowed to stage a protest for their final assignment. “The focus,” according to the initial report by the Arizona Republic, “was opposition to many of President Donald Trump’s policies, with deportations and a call for a new border wall the major focuses.”

The students were “shocked” by what the Republic dubbed in a follow-up story the “social media mob” that ensued. “They didn’t understand why everyone was so angry,” said course instructor Angeles Maldonado.

But ASU is hardly an isolated incident.

Students at Evergreen State College in Olympia, Washington, turned on biology professor Bret Weinstein for, as he explained to the Wall Street Journal, objecting to “a planned ‘Day of Absence’ in which white people were asked to leave campus,” a practice Weinstein considers “coercive segregation by race.” The student harassment became so severe he was advised by campus police to stay home for his own safety.

Instead of disciplining the agitators, Evergreen Interim Provost Kenneth Tabbutt urged faculty to go easy on them. After all, they’ve spent lots of time protesting, in some cases months or even years. So undergraduates should be graded leniently given their heavy extra-curricular campus rioting load.

Little wonder the public is increasingly fed up by the rampant irresponsibility, self-indulgence, and violence masquerading as conscientious social protest on too many American college campuses—especially since we’re helping subsidize it.

A LendEDU survey conducted earlier this year found that nearly half of all college students (49.8 percent) believe the federal government is just going to forgive their loans after graduation.

So what were college students planning to do with all that “free” cash?

A subsequent LendEDU survey revealed that nearly one-third of undergraduates with student debt planned to use part of their loans to pay for their spring break trips (30.6 percent).

But the debt-spending didn’t stop there.

Booze (23.8 percent), restaurants (33.4 percent), drugs (6.6 percent), and gambling (5.6 percent) were among the purchases student debtors made with their federal student loans

Yet some sobering statistics indicate that the party could be ending soon. According to Student Loan Hero:

At a some point, the grown-ups need to put their foot down, and I don’t mean the federal government. Turns out, Uncle Sam’s been one of the biggest enablers of all. As my colleague Craig Eyermann explains:

...the U.S. Department of Education has now cumulatively borrowed over one trillion dollars from the public for the purpose of funding its Federal Direct Student Loan program since January 2009. ...[which] accounts for 10.8 percent of the increase of the national debt over the last eight years.

College is touted as an investment in American Dream. Instead too often it’s proving to be an escape from reality—on the backs of the American taxpayer.

Vicki E. Alger is a research fellow at the Independent Institute and author of Failure: The Federal Misedukation of America’s Children.

Vicki E. Alger is a Research Fellow at the Independent Institute and Senior Fellow and Director of the Women for School Choice Project at the Independent Women’s Forum. She is the author of the Independent book, Failure: The Federal Misedukation of America’s Children.
Posts by Vicki E. Alger | Full Biography and Publications
Arizona State University Day of Absence Evergreen State College higher education
Comments
Before posting, please read our Comment Policy.