What Is Kim Jong-un Thinking? 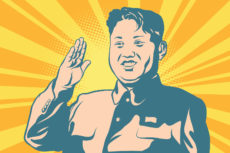 I can see myself as if I were back at the Liebefeld-Steinholzi school in Bern, Switzerland, with everyone convinced I was crazy because I talked little and was fixated on my PlayStation, keeping quiet for hours on end, observing others. What is going on in that weird head of his, what’s he thinking? they wondered.

I do the same to capitalist governments. I keep them thinking that I am crazy and willing to provoke an Armageddon—that’s how I have gained so much time since taking power in 2011. Now the world knows I have nuclear weapons and missiles, and it is too late to stop me. The advantage of the guy who makes others think he is crazy is that he alters their expectations. Had I not seemed insane, just like my father, the great Kim Jong-il, the evil bourgeois Westerners would have launched a devastating surgical attack on my nascent nuclear program. But my nuttiness served as a deterrent. What they believed to be dementia was nothing more than my “Juche” ideology, a nationalist self-confidence, my grandfather Kim Il-sung’s glorious contribution to socialism, which makes us indecipherable to foreigners.

When my father negotiated with the United States, China, Russia, Japan, and South Korea between 2003 and 2008, all he did was gain time while the nuclear program, our guarantee of survival, continued. Just as in 2012 I promised to freeze nuclear tests in exchange for food. Everything—my “Juche” madness, the tactical negotiations—was a means to an end. Now that we are nuclear, Trump will not attack because he believes me capable of immolating myself by launching chemical weapons or a nuclear bomb on Seoul or Tokyo: I have led them to the point where the bourgeois imperialists have no options. They wasted them. With the children that my beloved Ri Sol-ju will give me, my government will be eternal.

My second goal is to sharpen the contradictions between the United States and China. The Western bourgeois do not realize that my worst enemy is Beijing. They worry about nonsense—the fact that China and I have US$ 5 billion of bilateral trade, that my agents use Chinese companies to circumvent the sanctions—but what matters is that by provoking Washington I actually restrain Beijing. If there is something Xi Jinping loathes more than a nuclear North Korea, it’s the thought of a reunited, pro-American Korea. Having provoked the United States, as I have done by launching a long-range Hwasong-14, Washington will now blackmail Beijing expecting the Chinese to pressure me, something that the nationalist government in Beijing cannot afford to accept.

Look at them, Kim, they are already fighting—my second objective has been achieved. Now comes the third: terrify South Korea so that those South Koreans who want to get along with me will stop those who crave the American missile shield. Park Geun-hye, that corrupt president who approved the deployment of the anti-missile shield, those damn Thaad defenses, last year, was fortunately brought down from power and the recent bourgeois elections were won by the cowardly of Moon Jae-in, who has frozen their installation because he is scared of me.

Fear is not just good foreign policy—it works at home too: How could a boy in his late twenties, my age when I assumed power, impose himself on the communist structure if not through the use of Stalinist terror? I executed my Minister of Defense and seventy other officers, as well as Kim Jong-nam, my half-brother, who never forgave my father for picking me as his successor.

I will now press Ri Pyong Chol, Kim Jong Sik and Jang Chang Ha, the brains of my nuclear program, to accelerate the process until we begin the negotiations that China, the United States, and South Korea will beg me to initiate. . . .