Review: All Eyez On Me and Hip Hop’s Shakespearean Tragedy 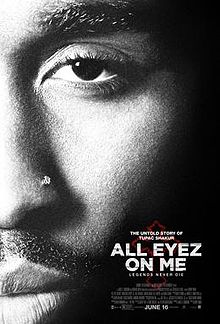 The most satisfied people leaving the theater after seeing the biopic All Eyez On Me are likely to be hip hop music fans and Tupac Shakur enthusiasts, one of the rap industry’s most talented and iconic artists. Others are more likely to feel that the tragically short life of Shakur, who was just 25 years old when he was murdered on the streets of Las Vegas in 1996, simply confirmed their worst suspicions about the misogynistic, violent, and narcissistic culture gangster rap lyrics seem to glorify. This is unfortunate because the story driving the film suggests Shakur’s life has more to teach us about tolerance, humility, and overcoming seemingly impossible odds.

Shakur’s lyrics, in keeping with much of the gangster rap culture at the time, projected thuggery, identity through violence, and a brutal world view with few values more important than loyalty. But Shakur, the film shows, was more layered than his music. The son of, Afeni Shakur (Danai Gurira, The Walking Dead, Eclipsed) a Black Panther Party leader in Harlem, Tupac grew up the projects of New York City, Baltimore, and Oakland, California. He witnessed the brutality of life, whether from drug gangs, drug addiction, or white cops using their authority to harass and subjugate poor blacks.

His politically radicalized mother also drove home the need for education, including, according to the film, classic literature such as Shakespeare. This family legacy emphasizing education and literacy led to the Baltimore School for the Arts where he met long-time friend Jada Pinkett Smith. Shakur’s life seemed to rock between survival on the street and self respect, particularly for his family. He used street talk with his casual friends and business partners but quoted Shakespeare with his more intimate friends.

Shakur, however, was a victim of the dysfunctional family dynamics as his father (and stepfather) disappeared and his mother succumbed to drug addiction. Shakur became the “man of the house” in his early teens, and the pressures of attempting to hold his family together at such a young age with few practical tools (or skills) are depicted well in the film. He tragically carries the anger of the black power movement along with the injustices he experienced daily as an African American male growing up in the 1980s and 1990s.

But this is not a conventional story of the corruption of fame and fortune, or the ability of wealth to project power and domination. On the contrary, All Eyez on Me is a modern-day Shakespearean tragedy, where the lead character rises to prominence only to be brought down a deeply ingrained character flaw. Indeed, Shakur’s murder is precipitated by his application of street justice in Las Vegas just as he seems to be maturing out of the gangster rap culture.

Shakur’s life has a lot to tell the more secular world about maturity, misogyny, violence and the illusion of control. The director, Benny Boom, best known for directing high-profile music videos, doesn’t pull punches. The screenwriters (Jeremy Haft, Eddie Gonzalez, and Steven Bagatourian) have done their best to honor their subject.

The film is plodding at times, and sometimes directed with a heavy hand. One scene late in the movie or example, appears to borrow from a particularly brutal scene from the classic mobster film The Untouchables (1987). A lot of time is spent on Shakur’s backstory in the projects through the device of a TV interview conducted (Hill Harper, CSI: NY, Covert Affairs) while he is imprisoned on what is projected as trumped up charges for enabling sexual assault (a real event). This backstory is important, and the use of the interview clever to help set up the central tensions in Shakur’s life, but slows the pacing significantly. The film picks up once Shakur is back in the rap community, driving his career forward as he is also beginning to question long-held beliefs about relationships and his role in the world.

If the goal of All Eyez On Me is to create biopic that keeps the life of this tragic figure visible within the music industry, Benny Boom and Morgan Creek Productions have accomplished their goal. This may be sufficient but this film had much more potential and seemed to aspire to more. Shakur struggled with many of the conflicts that hold back men from socially and economically isolated inner cities as they transition to adulthood and into the mainstream. The film hints at how Shakur struggled with these tensions, but fails to really deliver the coming of age story that could have taken his life into the mainstream.

Samuel R. Staley is a Research Fellow at the Independent Institute and Director of the DeVoe L. Moore Center in the College of Social Sciences and Public Policy at Florida State University. He is a contributing author to the Independent books, Property Rights and Housing America.
Beacon Posts by Samuel R. Staley | Full Biography and Publications
All Eyez On Me biopic film review Tupac Shakur
Comments
Before posting, please read our Comment Policy.
© 2022 INDEPENDENT INSTITUTE, 100 SWAN WAY, OAKLAND CA 94621-1428 | (510) 632-1366 | (510) 568-6040 FAX | SEND EMAIL