Will the Workday Shrink to Four Hours? 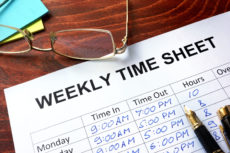 Jack Ma, the billionaire founder of Chinese firm Alibaba, anticipates that in 30 years the workday will shrink to four hours. He cites as evidence the continual decline in the number of works hours of the average worker. But while average hours worked has declined, some people work 60 to 70 hours a week and more, and for many of them a reduction in hours worked isn’t likely.

Workers engaged in manual labor, or whose jobs involve following the instructions of their supervisors, a reduction in hours worked is feasible and perhaps desirable. For knowledge workers, hourly productivity is higher the more hours they work (up to some limit), because they accumulate knowledge as they work. People who want to get ahead in those professions have to work longer hours.

For cashiers and assembly line workers, an eight-hour shift could be shared by two individuals, each working four hours, with no loss in productivity. And if fatigue on the job was an issue, productivity might even rise. A job like corporate CEO could not be divided in two and remain anywhere near as productive. The CEO makes decisions that have huge impacts on the direction of the company, and the more time the CEO spends gathering information and assessing alternatives, the more productive the CEO will be.

The same idea holds for many knowledge workers. Even secretaries will be more productive in the afternoon if they understand what went on in the office in the morning.

Two factors are at work here. One is understanding what is happening in the immediate environment. Project managers, computer programmers, and knowledge workers more generally will have a higher hourly productivity when they see first-hand as much as possible about their work environment. A second factor, more important in the long run, is that knowledge workers learn on the job, so the more hours they work, the more productive they will be in the future.

Much of that knowledge is what economists refer to as tacit knowledge. It is difficult to communicate to others, so the person who has the knowledge has to be the person who uses it. Why is it that corporations pay huge sums to hire experienced CEOs who have been out of school for decades when they could hire a new Harvard MBA with the latest education for much less? The more experienced individual has accumulated decades of tacit knowledge that can’t be taught in school. A shorter workday would mean less experience and less human capital.

For some jobs, a four-hour work day is very feasible, but in a knowledge economy, many jobs will require longer hours.