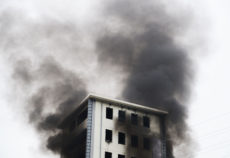 The AP reports that “grief turned to outrage” yesterday, as survivors of the London high-rise inferno learned that their government landlord’s “green” retrofitting of the building last year included the installation of exterior insulation panels that fueled the quick spread of fire from floor to floor.

Survivors’ outrage is now directed at the current government, the individuals who may or may not be the same as those whose policies produced the housing shortage that made the building’s tenants dependent on government housing in the first place—or those responsible for the climate models feeding “green” building theories leading to the retrofitting—or, most proximately, those who chose to use non-flame retardant insulation panels.

Nevertheless, at least their turning their outrage against government as the agent responsible for their plight is a step in the right direction.

Protestors angry with a lack of affordable housing in “progressive” cities such as San Francisco ought similarly open their eyes to government as the proper object of their anger. For, contrary to the popular narrative parroted—that “gentrification” is driving rents and home prices out of reach for all but the very rich—San Francisco’s median home price now reaching $1,672,100, and its streets filled with the homeless are the direct result of decades of government policies deadlier than the London fire.

“Smart” growth, “affordable housing,” and other regulations suppress private housing construction by an average of 30 percent. In one area studied, affordable housing laws resulted in a decline of new units from 28,000 in the year before the legislation, to 11,000 following its passage: a decrease of 60 percent.

Meanwhile, the homeless are three times as likely to die in any age group than the general population, while working families endure greater risks from commutes growing longer and longer between housing they can afford and jobs.

Governments depriving those they rule from access to low-cost housing is neither new nor confined to “developed” nations. In the 1960s, my father built extremely low-cost housing developments, providing for first-time home ownership for the poor, in developing nations from Peru to India. In country after country, he was driven out by governments hostile to private property rights, hostility fed by the collective wisdom of Western “development” experts.

It’s time for those victimized by these policies to stop being duped and rise up: You’re not being kept down because “the rich are getting richer.” You’re being killed and dispossessed by your rulers “protecting” you from housing you can afford and the opportunity to make a better life for yourself and your families.