How Soviets in 1960 Imagined 2017, and the Biggest Changes They Missed 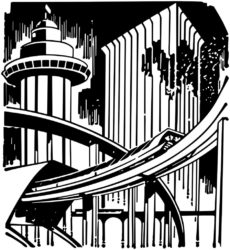 A 1960 Soviet filmstrip surfaced earlier this year depicting a vision of life in 2017. As Russia prepares for the 100th anniversary of the 1917 Bolshevik Revolution, it is interesting to reflect on the filmstrip to see what Soviet propagandists got right and what they got wrong.

The 45-frame filmstrip, found in a family collection of St. Petersburg resident Sergei Pozdnyakov, depicts a day in the life of Igor, a boy living in 2017 Moscow. Titled “In the Year 2017,” it was created by V. Strukova and V. Shevchenko and produced at the Diafilm Studio in Moscow. The creators got a few things right.

Igor chats live with his mother, who is onboard a ship on the Black Sea, using a videophone, which foresees the emergence of today’s mobile connectivity via Skype or FaceTime. Another frame depicts scanning technology that reads handwriting on a note to know what a person wants to eat and then automatically cooks the meal. And another frame depicts what appears to be a self-driving car.

But overall, the creators imagined a future that does not resemble 2017 because they chose to project a false and exaggerated view of Soviet science. Among the incorrect predictions:

The filmstrip ends with the Soviet Union thriving and Soviet scientists saving the planet. The last surviving Western capitalist “imperialists” are hiding on a remote island in the south Pacific, where they test a prohibited meson weapon, accidentally destroying themselves and the island. The explosion disrupts weather around the world, creating massive tornadoes and hurricanes. Soviet scientists, including Igor’s dad, dispatch the flying weather-control stations to stop the storms, save the planet, and preserve the socialist paradise of 2017!

Of course, the biggest miscalculation of all was the filmstrip’s implicit assumption that the Soviet Union would still exist in 2017. In reality, of course, the USSR dissolved in 1991, more than 25 years ago.

The filmstrip, and the Soviet Union itself, created a façade of success to hide its lack of scientific progress and economic prosperity. The bigger lesson of the filmstrip is that the most significant changes are likely to be unanticipated shocks, like the collapse of the USSR.

Hopefully, the next unanticipated shock will be the replacement of many, if not all, government activities with private, contractual, voluntary arrangements, made increasingly possible with advances in smart technology.