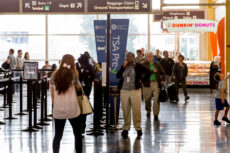 What happens if the TSA catches someone with a firearm at one of their checkpoints? It happens a lot. Last year the TSA found 3,391 guns in carry-ons at checkpoints. This happened to a friend of mine this week. Here’s what he told me.

He and his wife were going through the TSA checkpoint to go to their flight when the TSA found a handgun in her purse. She carries it regularly and had forgotten to leave it home before her flight. The TSA allowed my friend to take his wife’s handgun back to their car in the airport parking lot. A TSA employee accompanied my friend to the car and watched him lock the handgun in the car’s glove compartment. They then left on their flight, gun-free.

My friend’s story reminded me of another story I’d read in the news a few months ago. Guitarist Rick Derringer had been found with a handgun at a TSA checkpoint, was charged, pleaded guilty and was fined $1,000. Some people are charged; some they let go.

There are several differences in the two cases, including the fact that Derringer actually carried his gun on a plane and the TSA discovered it after he arrived in the US on an international flight. Also, Derringer claimed to have carried the gun regularly on past flights, whereas my friend’s wife forgot she had it in her purse. But, if she’d gotten past the checkpoint with the forgotten gun, she also would have carried it on the plane.

I’m not passing judgment here on the TSA, Rick Derringer, or my friend’s forgetful wife. I’m just passing along this story because I thought it would interest some readers of The Beacon.

My guess is that readers will have many different reactions to it, depending on lots of things, including where they are living. I conjecture that people living in rural areas are more comfortable with the idea of people carrying guns, as would be people in the South compared with people in the Northeast or on the West coast.

I’m surely oversimplifying by stereotyping people by where they live, but I will note that my home state of Florida, which has a population of just under 21 million has issued 1.6 million concealed weapon permits. About half the population is under 21 and so not eligible for a permit, so easily more than 10% of the population is permitted to carry a concealed firearm. Not all of them do, of course, but it gives you an idea of the comfort level many Floridians have regarding carrying firearms.

In this context, it is easy to picture TSA employees, many of whom will hold concealed weapons permits themselves, sympathizing with a forgetful woman who had a firearm in her purse as she went through TSA screening, and allowing her husband to take it back to their car.

Some readers will view this as an innocent mistake; others will see it as a violation of the law that should have been punished. I don’t know what the consequences are for people found with firearms by the TSA except in these two cases (Rick Derringer’s and my friend’s). Should they be prosecuted, like Derringer, or let go, like my friend?

What do you think?