Government Schools: Sowing the Seeds of Our Destruction

Several years ago, the Independent Institute honored Andy Garcia at our unforgettable Gala for Liberty (other honorees that evening were Bill Bowes and Desmond Tutu).

There was not a dry eye in the house (including his) as Andy Garcia recounted his memories of leaving his home, Cuba, at the age of 5.

Once the Castros had seized power, they passed a law giving the State full rights over all children. As I had been taught by my true-believing Marxist Development Economics professors at Stanford, this is how you build the “New Man” that makes Socialism the ideal society.

Cuban parents not wanting their children to be raw material for Marxist experiments, instead made the ultimate sacrifice and turned their children over to the Catholic church’s Peter Pan project, under which their children were flown to live in freedom with families in the United States—not knowing if they would ever see their children again, and many of whom did not.

After Andy Garcia’s mother reported to his father that she had seen Andy (at the age of 5) marching and singing the Internationale, his family joined the exodus. Fortunately, Andy’s father was able to later also leave Cuba, and the family was reunited in Florida:

How amazing then that American parents living in liberty, which while increasingly imperfect, still far exceeds the vast majority of the globe, willingly deliver their children for indoctrination to the government school system.

Earlier this week, I received an eNewsletter from an Oakland School Board Director, proudly reporting:

Earlier this week I attended May Day activities at San Antonio Park in Oakland. Students, immigrants and workers from every corner of Oakland gathered for teach-ins, and to stand up for workers, immigrants, and a socially just city and country. I helped kids to make protest signs for the march, and it was awesome to see the next generation of organizers and activists in action.

And headed by this charming photo of extremely young children with their protest signs: 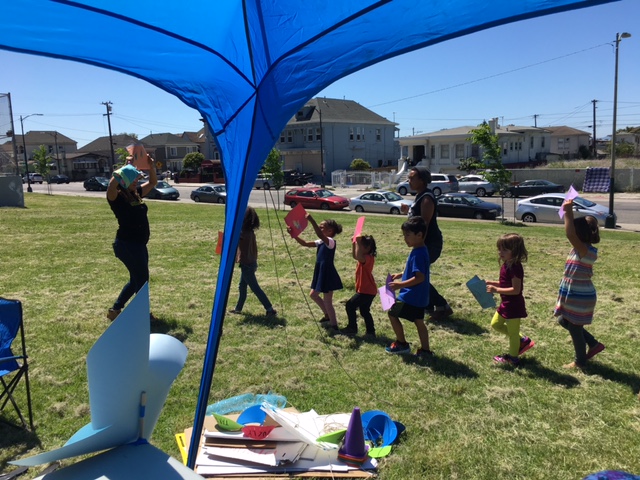 How different from the photos of this week’s protests against the government of the United Socialist Party of Venezuela, including of protestors being run over by armored military vehicles.

Perhaps the only change potentially capable of bringing peaceful transformation to a more free society is complete severance of education from government. This change would eliminate the system that has inculcated generations of children in statism and collectivism, reduced children’s capacity for reason and logic, and deprived them of lessons of history about the nature of governance and governments’ misuse of power.

In the meantime, please encourage every parent you know to withdraw from the government education system to help ensure our children a brighter future.