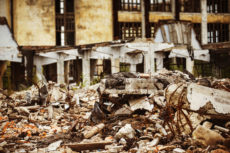 I am an economist. I am convinced of the power of basic economic analysis, and I believe that during the past fifty years or so my own work has demonstrated that power repeatedly. But economics is not the only aspect of a proper evaluation of the world’s workings, especially where government intrudes in economic and social affairs.

A certain species of economist—often those who took to economic analysis in grad school as if it were the be all and end all of understanding the world—tends to dismiss all moral elements in an appraisal of government action, maintaining that because every situation is one of trade-offs in an uncertain situation in which the outcomes of counter-factuals cannot be known with confidence, one must not criticize government actions simply because they are plainly immoral. After all, they might be necessary to preserve life on earth or to attain some other end of transcendent significance. For example, one cannot simply criticize George W. Bush’s invasion of Iraq on moral grounds because—who really knows?—Saddam’s government might have been only days away from developing and using nuclear weapons against a large city.

This kind of who-knows-what-might-otherwise-have-happened appraisal often serves to exculpate even great evils, and to do so on very flimsy grounds. The main problem is that it disregards relatively firm information that is available and treats implausible relations as if they were as likely as anything else. It also fails to consider how often—which is to say, virtually always—the government seeks to justify its wasteful and destructive actions by spreading misinformation and propaganda. That is, such a priori dismissal lacks a realistic understanding of the nature and operation of the state as an institutional complex founded on violent force and ceaseless fraud.

So, yes, economic analysis is necessary for a sound appraisal of government policy actions, but such analysis does not render moral appraisal irrelevant. Far from it. If it is wrong to launch a military attack against a country that has not attacked one’s own and lacks even a capacity for such an attack, no amount of yammering about unknown counter-factuals can make such an allegedly preemptive attack a justifiable action. Likewise for countless other government actions, from the so-called drug war to drone attacks on Yemeni villages populated mainly by innocent men, women, and children. Some things are wrong; they violate people’s natural rights; and they ought not to be done. And no amount of agonizing over economic uncertainties and implausible but-what-if trade-offs can excuse such wrongful acts.