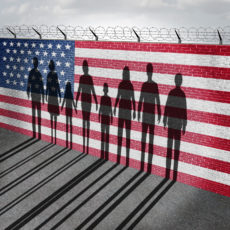 I am a consistent defender of allowing free passage of peaceful people across national borders. I understand full well why someone from an impoverished Mexican village or a violent hellhole such as Tegucigalpa might wish to migrate to the USA, where wage rates are 5-10 times greater for unskilled labor and, for Hondurans, Salvadorans, Guatemalans, and many people from the Middle East, physical security is better.

However, if you are not in such desperate straits, I would strongly suggest that you avoid attempting to enter the USA, however legally you might try to do so. Those entering the country through government checkpoints, either at the border or at an airport, run a high risk of being treated with great contempt by the border thugs and are at considerable risk of worse, including not only being detained and interrogated at great length (and completely without a plausible basis) and being compelled to surrender computer, phone, and social media passwords along with the devices, but also being denied permission to enter and forced to return to their place of departure.

The USA is simply not a welcoming place. It is a police state, and a hostile one at that. It makes virtually no attempt to distinguish potentially threatening people from ordinary people who, to anyone with a trace of brain, obviously pose no threat to national security or the personal well-being of current U.S. residents. So, be smart, amigos: don’t go there unless your have a very important reason to do so.

I am now kicking myself for having agreed to attend a conference in Maui in April. I should have listened to my wiser angel. I doubt very much, however, that afterward I shall ever make the same mistake.