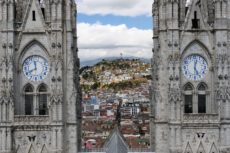 It is a pity that Ecuador’s presidential election, which will be held this coming Sunday, is not attracting more international attention. It should, now that the world is witnessing the rise of populist nationalism.

For the past decade Ecuador has been governed by Rafael Correa. Like other Latin American populists, he won free elections but changed the constitutional rules so he could remain in power indefinitely through a combination of authoritarianism, fiscal profligacy, and demagoguery. However, the backlash against populism in the region and his increasing unpopularity at home forced Correa to give up his plans to run for yet another term this year. Which is why this election marks the beginning of the end of his rule.

Surveys say that 70 percent of the country calls for major changes. Although the government’s candidate, Lenin Moreno, is in the lead, he has only one-third of the vote at most, and his running mate is under serious accusations of corruption. Both Guillermo Lasso, a successful entrepreneur and banker who is in second place, and Cynthia Viteri, the Social-Christian candidate who is in third place, have a good chance of beating Moreno in the second round if Correa doesn’t rig the outcome.

Correa won the oil lottery when he came to power. As shown in an article by Gabriela Calderón that uses data put together by Pablo Arosemena and Pablo Lucio Paredes, Correa’s government has received half of all the oil revenues obtained by Ecuador since 1972, when the country began to export crude in large volumes. Despite the oil bonanza, between 2007 and 2014 the country’s rate of economic growth, about 4 percent, was very similar to that of the previous six years, when oil revenues were much more modest.

What did Correa do with so much money? Waste it, of course. For a while, that gave him popularity and a captive vote. Public spending amounted to almost half of GDP, something unusual for a Latin American country. Of course, even that was not enough, so he borrowed more—and the national debt almost quadrupled. If a non-populist president was spending so much money on serving that debt, he would be savaged by the populists, who would accuse him of high treason.

Ecuador now understands the consequences of this populist spree better. The economy did not grow in 2015 and output declined in 2016, while some of Ecuador’s neighbors with less statist systems, such as Peru, recorded several percentage points of growth. The outlook for the coming years is bleak.

If economic malaise were Correa’s only legacy, this alone would be serious. But there is another legacy, not measured in numbers: the institutional devastation, the systematic erosion of liberal democracy under the rule of law. Few journalists in the region have suffered greater persecution in recent years than the Ecuadorian press.

Correa naturally hopes that his candidate, Moreno, will succeed him and preserve his “Citizen Revolution,” as he calls his regime, which not for the first time is shaken by corruption scandals.

The task of the opposition, whoever makes it to the second round, will be to put together a united front against Moreno. Ecuador needs to do what has already been done in other Latin American countries: to send statist populism packing and begin the work of adults, laying the foundations for genuine economic development.

It is a mistake to believe that Ecuador is not important enough for outsiders to closely watch. It has been a key ally of Venezuela’s “Chavismo” and a source of illiberal governance and propaganda for years. Other Latin Americans—the Argentines and the Brazilians, for example—have recently awakened from the long populist lethargy. Now it’s Ecuador’s turn.

Alvaro Vargas Llosa, a Senior Fellow at the Independent Institute, is the author of Global Crossings: Immigration, Civilization, and America, and Liberty for Latin America: How to Undo Five Hundred Years of Statist Oppression.