Tariffs, Pickpockets, and the Nationalist Snake in the Moral Grass 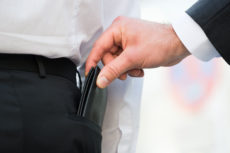 Like nearly all economists, I am inclined to explain to people who favor tariffs that such taxes entail inefficiencies. They make the consummations of otherwise desirable trades more costly and hence discourage people’s actions that, absent the tariffs, would result in the creation of new wealth. After all, people who voluntarily purchase goods and services from sellers who reside outside the national borders expect to gain by making those purchases (and, of course, the sellers also expect to gain from the sale), and a gain from trade is the principal form of wealth creation in the world today. It is child’s play for an economist to explain the theory of comparative advantage, however inclined most lay people are to reject the argument despite its iron-clad logic.

Protectionism, as it is misleadingly known, has always been an insider’s game, a political gambit aimed at enriching those to whom the government is especially beholden or seeks to seduce at the expense of other people. Incumbent producers who produce products on which tariffs are imposed succeed in repelling competition by force of the government’s customs officers, which is to say that they succeed in increasing their profits by force, not by offering consumers a better deal.

Peaceful people who avoid the tariff by importing goods surreptitously are not only stigmatized as smugglers, but subjected to criminal sanctions as if they had committed real crimes such as rape or assault and battery. In this way the government not only discourages free trade, but misleads citizens in general into thinking of free trade as a criminal enterprise. What could better serve the interest of an organization—the state itself—that cannot exist except by extortion and robbery? (Of course, the government pretties up its extortion by calling it taxation and misrepresents its robbery by calling it fines, fees, and civil asset forfeitures, but renaming these coercive takings does nothing to alter their criminal essence.)

I am often tempted to point out the foregoing realities to readers or listeners while defending completely free trade, which is merely one form taken by people’s exercise of the general human right to act peacefully in one’s own best interest. I sometimes characterize protectionism as simply a type of pickpocketing disguised as not only a legitimate government policy, but also as one that serves the general public interest by promoting greater employment and overall prosperity. We have been subjected to a great deal of such economic looniness by Donald Trump and his supporters during the past year, as they have ceaselessly reiterated the worst mercantilist fallacies of the past four hundred years.

The principal obstacle for anyone who argues as I do, however, is that ultimately most people do not buy the objection that a tariff is a form of pickpocketing. They reject this argument on the same grounds that they reject similar arguments one might bring against countless other government policies that work in the same way—benefiting politically organized special interests at the expense of consumers in particular and the bulk of society in general. People by and large do not believe in stealing from their neighbors, but they make one gigantic exception to this moral rule: if they themselves do not snatch the loot, but hand over the job to the government, then it is hunky-dory and many of them are all for it.

Therefore, anyone who argues as I do that a tariff is essentially nothing but a form of pickpocketing is unlikely to win over many people. Maybe they can be shown the logic of comparative advantage and persuaded that it is undesirable to create artificial inefficiency. But one is unlikely to get far in persuading them that tariffs are immoral because in nearly every case in which the government’s actions are at issue, they have already thrown morality out the window.

We can have government as we know it or genuine morality—morality as expressed in the natural law—but we cannot have both at once. However much we might try to muddy the moral waters, a stationary bandit is still a bandit, regardless of who ends up holding the loot at the end of the day.