Introduction to the Austrian School of Economics 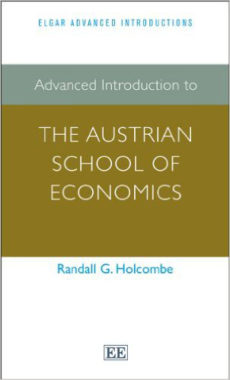 My book, Advanced Introduction to the Austrian School of Economics, is being translated into Korean, and the translator asked me to provide a short preface for the Korean edition. I’m reproducing it below, partly just to give my book a bit more publicity (it’s affordably priced, if you go with the paperback), partly to indicate how I see how the ideas of the Austrian school are relevant to Korea, and partly because the introduction will be translated before it is published, so the only people who will be able to read it are those who read Korean. Here’s what I had to say:

Mainstream economic theory at the beginning of the twenty-first century rests on a neoclassical foundation of equilibrium models. The concept of equilibrium in economics, as in the sciences more generally, is that when something occurs to disturb that equilibrium, there are forces at work to pull the economy back to equilibrium. Equilibrium models provide a great deal of insight into the way markets coordinate the desires of suppliers and demanders in all markets so that the quantity supplied equals the quantity demanded. This is one of the great achievements of economic science, and the equilibrium approach to analyzing economic phenomena has developed and matured over the twentieth century and into the twenty-first.

All models are simplifications of reality, and when they are applied to issues in which some essential elements have been assumed away by the model, can give misleading policy guidance. One area in which the neoclassical equilibrium framework has misled some economists is in policies that generate economic progress. In fact, often when forces disturb an equilibrium, those forces change the underlying nature of that market, and the economy more generally, so the economy never returns to its former equilibrium. The economy is characterized by progress and change, not equilibrium.

The neoclassical framework assumes firms have production functions and produce certain goods, but leaves outside the model an explanation of how production technologies are developed, and how ideas for new and improved goods and services emerge. Entrepreneurs. the people who develop new and improved goods and better ways of producing them, are a central component of the Austrian school’s contribution to economics.

A fundamental economic problem is that knowledge in an economy is disbursed among all individuals in an economy. Knowledge is decentralized, new information is often contradictory, and knowledge held by one person often cannot be easily communicated to others so they can make effective use of it. Whereas the neoclassical framework emphasizes how markets are able to generate equilibrium prices and quantities, the focus of the Austrian school is more on how markets coordinate the decentralized knowledge in an economy and incorporate new information into that knowledge base. The coordination and effective use of everyone’s economic knowledge is the way that a market economy generates economic progress.

South Korea has enjoyed a remarkable period of economic progress since the early 1960s, and Koreans understand that as the global economy progresses, an economy that stands still will fall further and further behind. The challenge is to find policies that allow that economic progress to continue, and an Austrian-school view of the economy is that prosperity is the result of an effective coordination of decentralized knowledge and an effective incorporation of new knowledge into a continually developing economy.

The challenges for Korea are as great as for any developed economy in the world because its past reliance on industrial policy suggests that heavy government oversight and direction of the economy, which has worked in the past, should be continued into the future. The Austrian school views this type of thinking with skepticism, and the discussion of the “socialist calculation debate” in this book gives some reasons for this skepticism.