Over a Decade Later, Tax Hikes Still Proposed to Pay for Romneycare 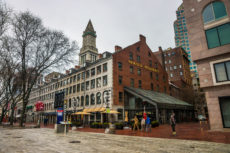 Governor Charlie Baker of Massachusetts has proposed a tax of $2,000 per worker on businesses that do not offer health coverage to employees who become dependent on Medicaid. This makes him the second Republican governor of Massachusetts to buy into the notion that imposing taxes (or fines or penalties or fees) on individuals and businesses can force them to accept responsibility for government failure at getting health spending under control.

The reality is that the mandate merely camouflages significant growth of government spending. This has been the case in Massachusetts since Day One: Spending has grown out of control despite many failed efforts to bend the cost curve.

State and federal spending attributable to Massachusetts health reform almost doubled from $1.0 billion in 2006 to $1.9 billion in 2011. Hospitals’ emergency department use increased by 17 percent in the two years after the reform was implemented.

Insurers were crushed by skyrocketing claims. The state insurance commissioner refused 235 of 276 rate hikes for April 2010 and demanded that plans rebate premiums that had already been paid. Massachusetts’ health plans hemorrhaged cash, and a senior regulator described the situation as a “train wreck” (Robert Weisman, “State Acts to Oversee 3 Insurers, Boston Globe, June 11, 2010).

What these taxes and fines and penalties and growth in welfare really accomplish is feeding more unaccountable money into hospitals and other health services facilities. From January 2008 (the national high-water mark of employment before the Great Recession) through December 2016, Massachusetts added 302,000 nonfarm civilian jobs. However, 164,000 – more than half – are in education or health services, which grew 26 percent. Non-health jobs grew only five percent. This is surely way out of whack.

Hiking taxes on businesses to pay for a failed, decade-old state health reform that paved the way for Obamacare is not a good sign for Massachusetts’ ability to respond to Congress’ imminent repeal of Obamacare in favor of state-regulated insurance markets.