How Many Americans Have Refugees Killed? 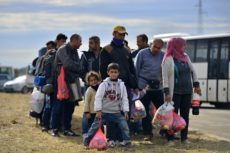 Last week President Trump issued an executive order that suspended new refugee admissions for the next 120 days. The order capped the total number of refugees allowed into the United States this year at 50,000, about half of what was allowed under Obama. Travelers from seven nations—Iraq, Iran, Syria, Yemen, Sudan, Libya, and Somalia—are banned for 90 days.

The order sparked a wave of protests and litigation. The ACLU sued in Brooklyn over the detention of two Iraqis at JFK airport. On Saturday, Judge Ann Donnelly issued an emergency stay, blocking the deportation of some 200 people. She cited “irreparable harm” as part of her decision. Photos of lawyers sitting on the floor at major airports circulated around social media as hundreds of attorneys filed emergency habeas corpus petitions on behalf of detained travelers. It’s known that UMass Dartmouth professors were detained under the order. They have subsequently been released. A Clemson PhD graduate was taken off her flight in Dubai and not allowed to reenter the States, where’s she’s lived for several years. She’d been visiting family in Iran.

There’s a lot to be said about this ban. As noted above, the legality of the order is already in question. Others have pointed out (I think rightly) the hypocrisy of the left. While they have rallied against Trump’s order (again, I think rightly), they failed to so much as raise a finger in protest when Obama effectively turned away Cuban refugees in the last days of his presidency. Still, others have called the order “a ban on Muslims.” While I think there may be some truth to that designation, given Trump’s political rhetoric, it’s difficult for me to call this a ban on Muslims, when a host of other predominately Muslim countries are not covered under the ban (e.g. Egypt, UAE, Saudi Arabia, Afghanistan, etc.).

When pressed about the basis for the ban, White House officials cited concerns regarding terrorism. The ban is supposed to be in place until more stringent vetting processes can be implemented.

The fact of the matter is that refugees entering the United States already face a remarkably long and complex vetting process. The United Nations, the State Department, the FBI, and Homeland Security review each case. The process is some 20 steps long and can take years. When you’re waiting in an overcrowded refugee camp, or living in a region torn apart by conflict, that’s a long time to wait.

But let’s suppose that refugees aren’t your primary concern and that, like the White House, you’re concerned about the possibility of terrorists entering the United States as supposed refugees.

Let’s bring out some numbers, shall we?

According to the Cato Institute, the United States admitted 3,252,493 refugees between 1975 and 2015. Twenty of them were terrorists. This represents some 0.00062 percent of all refugees. Only three attacks carried out by these refugees were successful.

In total, in a span of forty years, “terrorist refugees” have killed three people in the United States.

But what about the attacks in San Bernardino, the Orlando Pulse Nightclub shooting, the Boston Marathon bombings, and 9/11? Are these not “proof” that such a ban is warranted? After all, the individuals responsible for the attacks had some connection to foreign countries.

In reality, the current executive order would have stopped exactly none of these attacks.

The Pulse Nightclub shooter was born in New York and was a U.S. citizen. Of the two San Bernardino shooters, one was born in Chicago. The other, his wife, was born in Pakistan and lived in Saudi Arabia—neither country is on the “banned” list. The Tsatnaev brothers, responsible for the Boston bombings, were born in Kyrgyzstan. People from Kyrgyzstan aren’t banned under the current executive order. Of the 19 people responsible for hijacking four airplanes on 9/11, 15 were from Saudi Arabia, two were from the UAE, one was from Egypt, and one was from Lebanon. Again, these countries aren’t on the “banned” list.

When I have the occasion to discuss the economics of terrorism, I always offer a list of things more likely to kill a U.S. citizen than a terror attack. It seems appropriate to include here. (You can find links to source material for most of these here.)

Heart disease (35,079 times more likely to kill you than a terrorist)

Cancer (33,842 times more likely to kill you than a terrorist)

Alcohol (4,706 times more likely to kill you than a terrorist)

Starvation (187 times more likely to kill you than a terrorist)

Drowning in a bathtub

Dying in a fire

And my personal favorite—toddlers. Yes, you are more likely to be killed by a gun-wielding toddler than a terrorist.

When discussing whether or not to undertake a policy, I tell my students we must consider the benefits and costs. In this case, we can say that the supposed benefit is practically zero. The cost, however, is not. We haven’t even looked at the number of people who may die as a result of this recent order. We haven’t discussed the cost of enforcing the ban or the cost of implementing a new vetting process.

This executive order won’t stop terrorism, but it will disrupt the lives of thousands. It will separate families and deny a better life to those fleeing from conflict. Most importantly, by banning refugees, this executive order means that many people will undoubtedly lose their lives.