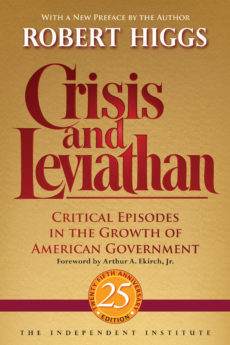 The interrelated complex of ideology, identity, solidarity, and collective action form the ground level in fruitful social analysis. Leaving out this complex, as both mainstream and Austrian economists usually do, means that one sacrifices the opportunity to understand what otherwise seems inexplicable or gets explained only by bizarrely twisting the standard model.
At least, so I have argued since the early 1980s, most fully in chapter 3 of Crisis and Leviathan, but with some elaboration and many applications in later works. I sometimes forget this lesson myself, lapsing into a too vulgar reliance on “following the money,” but Elizabeth always calls me back to it. For just such correction, I suppose, God gives wives to husbands.
The events of U.S. politics during the past year present as glaring an example of my vision as anything I know. It’s comfortable for many of us, especially those trained in mainstream economics, to suppose that economic self-interest is the bedrock of political and other collective action, but clearly—in my view, at least—it is not. Ideology tells a person what is “in his interest”; he shapes and maintains his identity accordingly; and by acting publicly in conformity with the ideology’s tenets, the person enjoys the psychological satisfaction of solidarity among the ideologically defined “good guys.” As Sam Bowles once noted, people act for two distinct reasons: to get things, and to be someone. We would do well to remember the second motive, which plays a central role especially in relation to people’s participation in large-group collective action.
Robert Higgs is Retired Senior Fellow in Political Economy at the Independent Institute, author or editor of over fourteen Independent books, and Founding Editor of Independent’s quarterly journal The Independent Review.
Posts by Robert Higgs | Full Biography and Publications
Comments
Before posting, please read our Comment Policy.
© 2021 INDEPENDENT INSTITUTE, 100 SWAN WAY, OAKLAND CA 94621-1428 | (510) 632-1366 | (510) 568-6040 FAX | SEND EMAIL