On January 1, the city of Philadelphia enacted a soda tax, or a “Sweetened Beverage Tax ” (SBT). The new policy levies a tax of 1.5 cents per ounce on most drinks containing a sugar-based sweetener or artificial sugar substitute (e.g. high fructose corn syrup).

The following infographics from the Philadelphia Inquirer show the impact of the tax on the price of many beverages. 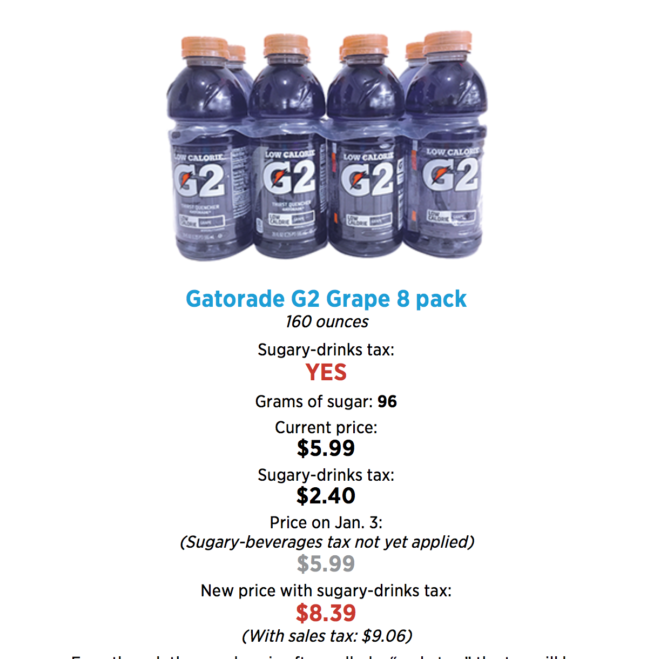 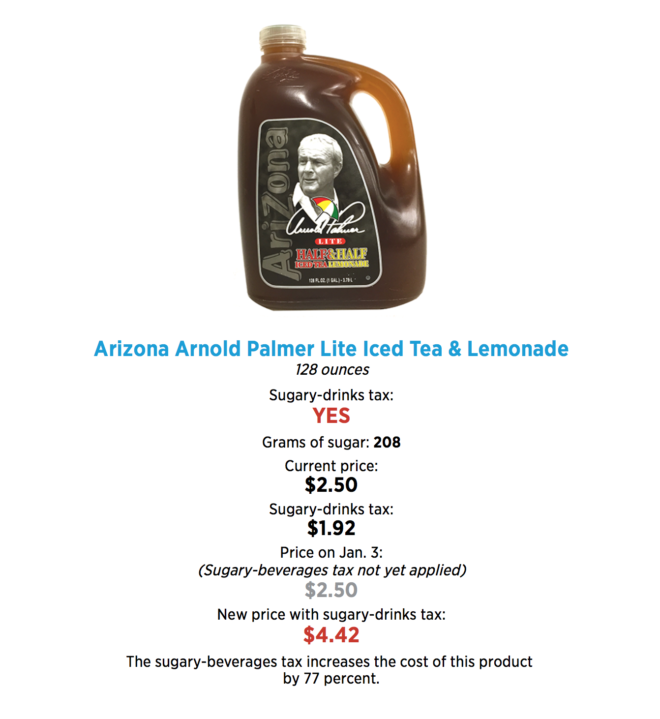 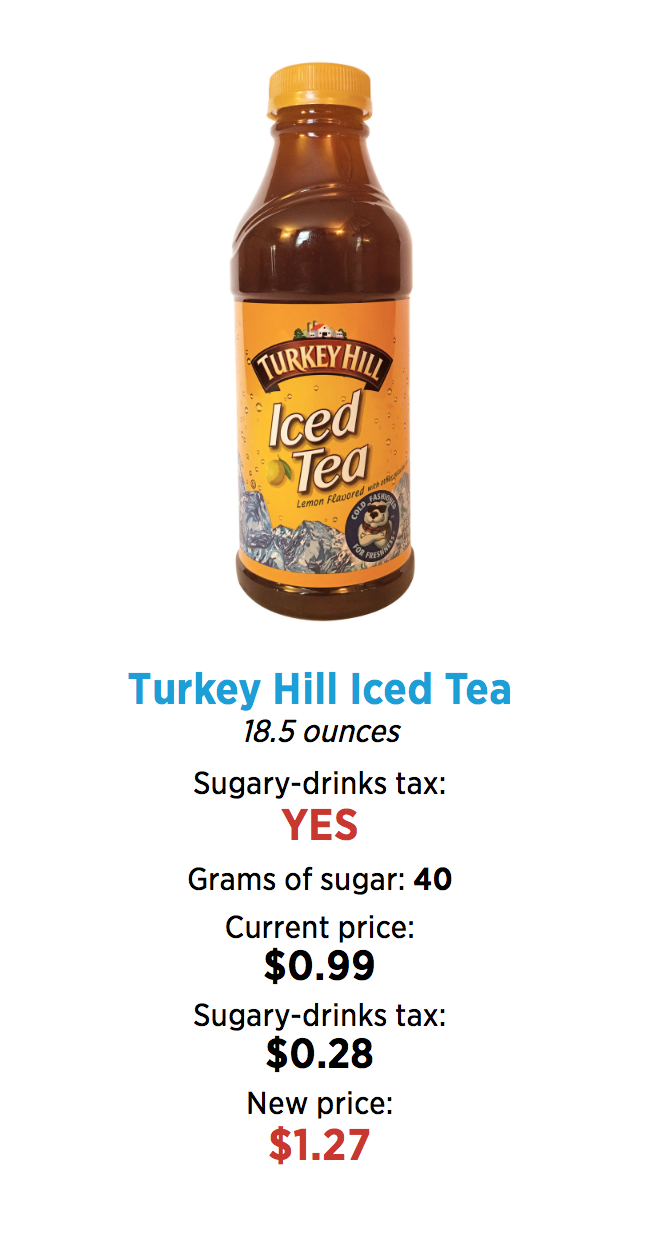 Proponents of the tax like Philadelphia Mayor Jim Kenney, argue that the tax will bring in millions of dollars that may be used for a variety of programs. He’s suggested that the money collected will be used to expand pre-K education, rebuild parks across the city, and open community schools. He also proposed investing millions into the city’s pension system (currently facing a multi-billion dollar deficit) and to pay back a bond on “green” infrastructure improvements.

In my principles courses I teach students about “price elasticity of demand,” a measure of how sensitive consumers are to changes in price.

We say that demand is relatively elastic when individuals substantially change their behavior when the price of a good changes. An example of relatively elastic demand would be something like Heinz ketchup. If the price of Heinz increased by 5 percent, we’d expect people would likely change their behavior. (They could easily switch to a cheaper substitute like Hunt’s ketchup or the store brand).

Whether or not a taxed good faces an elastic or inelastic demand is important for discussing tax revenue. I won’t bore you with the details, but basically there are two opposing forces at work when a tax is imposed from a revenue standpoint. For each unit sold, the government collects some tax. This obviously increases revenue. However, the tax also makes goods more expensive. As the first law of demand teaches us, when price goes up, people buy less. The fewer units people buy, the less that gets collected in taxes. (For a more detailed explanation, I suggest this video).

Governments collect the most tax revenues from goods with inelastic demands. Why? Because consumers won’t change their buying habits very much as a result of the tax. People will buy most of the units they would have prior to the tax, meaning government can collect taxes on each of those units. If a good has an elastic demand, consumers simply drop out of the market as the price increases and a lot of trades that would have taken place no longer occur. Government doesn’t collect taxes from the units that aren’t bought and sold.

What makes demand for a good elastic or inelastic?

As I tell my students, elasticity is all about the availability of substitutes. The more substitutes that are available, the more elastic the demand. In the earlier example with Heinz ketchup, a consumer could easily switch to another brand, or maybe buy a different condiment. There were many substitutes and so their demand for Heinz ketchup was relatively elastic. In the case of insulin, consumers couldn’t easily escape a tax because there aren’t substitutes for insulin. So we said their demand for insulin was inelastic.

My students’ textbook tells them to think of elasticity as a synonym or “escape.” It’s a good mental framework. If someone faces an elastic demand and have a lot of substitutes, they can easily buy another item if a tax is imposed.

So, can Philly soda drinkers escape the tax? Is the elasticity of demand for sugary drinks elastic or inelastic?

One might think it would be difficult to escape the tax since it’s imposed on all sugary beverages. If you want a sweet drink, what are you to do? This makes sense–except for the fact that Philadelphia isn’t located on an desert island. Want your soda without the tax? Go outside the city limits where the same products are easily available and the tax doesn’t apply.

This photo from Acme Bensalem, just outside the Philadelphia city limits, shows what’s happened to their stock of two-liter sodas. Their signage also reminds patrons that the tax does not apply to goods sold in their stores. 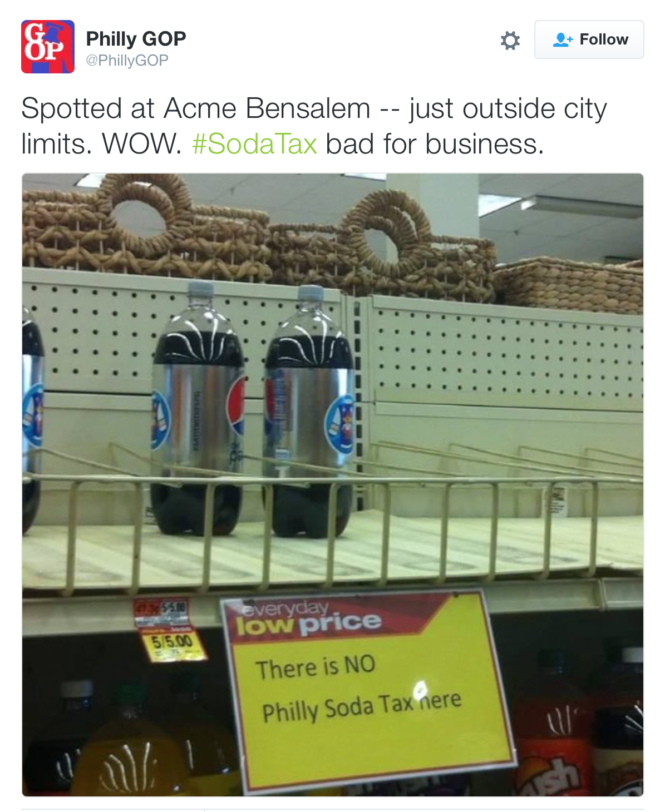 This is a pretty good indicator that, for many of Philadelphia’s residents, they can easily get their hands on soda from elsewhere. Maybe they buy their products outside of city limits as shown in the photo. Maybe they buy their own soda makers to use at home. (You can buy one on amazon for about $70). Perhaps people will start making their sweet tea and other coffee beverages at home. In other words, consumers have options.

There is a lot more to be said about this tax. For example, we could talk about how the whole exercise positively reeks of government paternalism. We could talk about whether or not government should try to control or “nudge” people’s food consumption habits. We could delve further into elasticity and talk about how it determines who bears the greater burden of a tax. I think the underlying economic concepts behind the tax and the revenue it may or may not raise are a good place to start.

The overall effects of the tax will not be observed for months, probably years. I think Mayor Kenney will likely be disappointed in how much revenue he is actually able to raise with the tax.