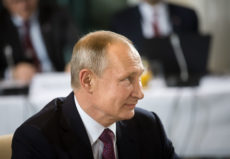 The FBI and CIA are in agreement that Russia in some way interfered in the U.S. election. What is known so far is that Russian hackers were able to access the emails of Hillary Clinton’s campaign chairman, John Podesta. Hackers also breached the Democratic National Committee (DNC).

According to sources, the Russian government sought to hinder the Clinton campaign and work to assist Trump in winning the presidency. In his last press conference for 2016, President Obama discussed the hacks, but carefully avoided questions on whether or not Russian president Vladimir Putin was involved. He did, however, say that “not much happens in Russia without Putin.” President Obama said he saw Putin in September while abroad in China and told him to “cut it out” with regard to the election hacking. He continued, “there would be some serious consequences if he (Putin) didn’t [put an end to the cyber hacks].”

People seem floored by these revelations. How could Russia interfere in the workings of the U.S. political process? How dare they try to manipulate the outcome of a presidential election?!

I’m reminded of a Biblical passage.

Those barking loudly over Russia’s involvement with the U.S. political process would do well to take a look at the history of U.S. foreign policy. The U.S. government has a long history, some two hundred years long, of interfering in the politics of other countries—and we’re not just talking emails.

In fact, the U.S. has a long history of not only supporting various governments, including brutal dictatorships, but actively assisting in the overthrow of various other governments. Here are a few to consider.

1898—In the aftermath of the Spanish-American war, the U.S. government invaded the Philippines, reneging on a deal with Philippine rebels to help the nation win independence and overthrowing the country’s new government.

1903—The U.S. government helped Panama secede from Colombia. It’s important to note that his occurred during the construction of the Panama Canal. (Shocker: the U.S. had an interest in said canal.)

1953—The U.S. government launched operations to overthrow the government in Guatemala. As a result, some 40 years of civil war ensued, which included a genocide and the deaths of at least 200,000 people.

1966—Kwame Nkrumah was the Prime Minister of Ghana when the country gained independence from the British. The U.S. government was not fond of his socialist, anti-imperialist views. As such, the U.S. government, via the CIA, worked to oust him in a coup in 1966.

(Note: the above is woefully incomplete. For a couple more lists of U.S. efforts to interfere in other countries’ governance, see here and here.)

The U.S. government has also sent millions of dollars in military and other aid to past and present dictators like Syria’s Bashar al-Assad, Zimbabwe’s Robert Mugabe, Cuba’s Fidel Castro, Libya’s Muammar al-Qaddafi, and Sudan’s Omar al-Bashir, propping up regimes which trample on even the most basic human rights.

Many people may say that the U.S. government’s involvement in these activities doesn’t excuse Russia. Perhaps they are right. Just because someone is engaged in bad behavior doesn’t mean others should as well. As the old saying goes, however, people in glass houses shouldn’t throw stones. Russia may be trying to sway U.S. politics, but the U.S. wrote the book on how to meddle in other countries’ affairs.

In the coming weeks and months, we may learn more about Russia’s involvement with the U.S. election.

Before we go denouncing Russia’s actions, however, we should take care to remove the plank from our own eye.