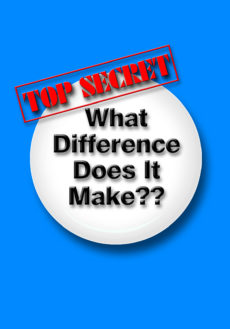 For years, the national security establishment has been telling us, “If you have nothing to hide, you have nothing to fear.” Ergo, the feds ought to be provided complete access to all of our emails, cell calls, internet browsing records, location, private in-home conversations, banking records, credit card transactions, etc., etc., etc., held forever, without question.

Yet suddenly, this same apparatus is aggressively promoting its findings that Russia “hacked” emails that negatively influenced the recent election outcome—with the DNC, Obama, Hillary, et al. screaming outrage at this foreign interference with our free and fair electoral process.

Others say the email releases were an inside job, including a former NSA official, who says they were leaked by an individual within the NSA concerned with the prospect of someone as demonstrably cavalier with national secrets as Hillary achieving the presidency; and Craig Murray, a former British ambassador to Uzbekistan and a close associate of WikiLeaks founder Julian Assange, who said:

Neither of [the leaks] came from the Russians. The source had legal access to the information. The documents came from inside leaks, not hacks.

Mr. Murray said the leakers were motivated by “disgust at the corruption of the Clinton Foundation and the tilting of the primary election playing field against Bernie Sanders.”

So, why the loud insistence it was the Russians; and, if the Clinton insiders had nothing to hide, why do they care?

Could it be because the information made public against their wishes included the following? (Sources provided lest this be judged fake news):

The DNC’s lying, cheating, and dirty tricks to derail the Sanders campaign (compared to which Nixon’s plumbers were amateurs), as reported in the New York Times, New York Post, Chicago Tribune, and others.

Multiple violations of even the most basic propriety by the Clintons and their use of their tax-exempt Clinton Foundation, including pay-to-play access to Hillary as Secretary of State to large Clinton Foundation foreign donors, and what has been dubbed “Bill Clinton, Inc.” (As reported in The Atlantic, Fox News, New York Times, and others.)

Media collusion with the Clinton campaign, including CNN’s providing the Clinton team Town Hall questions in advance, Clinton’s team receiving a New York Times article in advance of publication, and providing edits that were accepted on another.

To date, Democrats have tried to blame Hillary’s loss of the election on racism, homophobia, xenophobia, James Comey and the FBI, an incompetent campaign staff, “fake news,” social media, a pro-Trump mainstream media, the electoral college, and Millennials.

In the end, does it matter who provided the emails to WikiLeaks? After all, if the Clinton campaign had nothing to hide, why should they mind?

Please see the Independent Institute’s widely acclaimed, new book on the rise of government surveillance in the U.S.: American Surveillance: Intelligence, Privacy, and the Fourth Amendment, by Anthony Gregory.