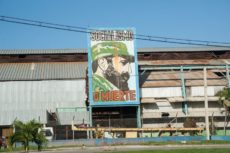 One would think there is no doubt in anybody’s mind about Fidel Castro’s horrific legacy. And yet we have heard important leaders say some outrageous things.

What is Castro’s real political legacy? The last free election in Cuba was in 1948; Fidel Castro turned the island into a more ruthless police state than the one he inherited from the Batista regime. The guerrillas he exported to Latin America gave rise to savage right-wing military dictatorships in the 1970s. Today no country in Latin America, with the pathetic exception of Venezuela, models itself on Cuba. The few left-wing populists who were allies of Cuba have been defeated at the polls (Argentina), constitutionally removed from power (Brazil), or forced to give up their hopes of another unconstitutional re-election (Ecuador, Bolivia), while Nicaragua’s Daniel Ortega has metamorphosed into a right-wing despot.

Soon after he took over from Fidel (first on an interim basis, then formally), Raúl Castro, who would like to copy the Vietnamese formula (state capitalism and one-party rule), began to renounce some basic tenets of Cuba’s socialist economic model. He did not go far, but some of his measures—those relaxing the draconian emigration rules, allowing small businesses to operate privately, and re-establishing diplomatic relations with the United States without the precondition of lifting the embargo—have a counterrevolutionary whiff.

What about Fidel Castro’s economic legacy? The respected Cuban economist Carmelo Mesa-Lago has calculated that the Soviet subsidy amounted to some US$65 billion over a 30-year period and that Venezuela’s largesse towards the island amounted to some US$10 billion annually during the reign of Hugo Chávez. (It continues in diminished form under Nicolás Maduro.)

Castro wanted to turn Cuba into an agricultural powerhouse, but today it imports more than 70 percent of its food, and the sugar harvest, which reached eight million tons a long time ago, has been reduced to about 1.4 million tons. The small industrial activity that still exists is half of what it was at the time of the fall of the Berlin Wall. Economics professor and noted blogger Tyler Cowen thinks the country’s per capita income is below US$2,000.

What now? Raúl Castro announced in 2013 that he will relinquish power in 2018 and seemed to suggest he would be succeeded by Miguel Díaz Canelo, an electrical engineer and veteran. Raúl will relinquish the presidency of the Council of State and the Council of Ministers, but real power rests in the military and the Communist Party, where he will continue to call the shots. His son-in-law, Luis Alberto Rodriguez, is the head of GAESA, the holding company of the armed forces, which directly controls half of Cuba’s economy. This is the body you must partner with if you want to invest in tourism, retail, infrastructure projects, etcetera. Not to speak of the third Castro generation, already positioned for important things. A son of Raúl Castro, Alejandro, is a colonel in the Ministry of the Interior and the head of counterintelligence.

At the age of 85, Raúl will not be around to make decisions much longer. But anyone who thinks this is the beginning of a meaningful political transition is sorely mistaken. Fidel’s brother believes in combining limited market reforms with one-party rule—the “Vietnamization” of the Cuban model. He may not be Fidel, but he commands enough authority to make sure nothing funny happens under his watch.

What is much less clear is what will happen after Raúl Castro is gone. No apparatchik wields enough power to ensure the perpetuity of the system. Although civil society is too weak at this time to rebel against one-party rule, the cracks that might open within the structure of the state could unleash forces of the kind we saw in Eastern Europe both inside and outside of the Communist Party.

But that will not happen anytime soon.

For more on Castro’s legacy, see the Independent Institute books, Liberty for Latin America: How to Undo Five Hundred Years of State Oppression and The Che Guevara Myth and the Future of Liberty, both by Alvaro Vargas Llosa.