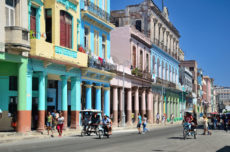 The recent death of Cuban dictator Fidel Castro brought forth a grotesque encomium from the Canadian Prime Minister, Justin Trudeau, who asserted, “Mr. Castro made significant improvements to the education and healthcare of his island nation.”

Michael Moore, producer of propaganda dressed as documentaries, made a film in 2007 called Sicko, in which he also praised Cuban health care. The reality was different. According to a U.S. intelligence cable published by WikiLeaks, a local person covertly employed by U.S. intelligence shared these observations:

What about the wonderful hospital Moore portrayed in his film? The U.S. intelligence cable explains that, too:

Built in 1982, this newly renovated 600 bed, 24 story hospital is depicted in Michael Moore’s film “Sicko,” where some 60 surgeries are performed daily including heart, kidney, and cornea transplants, mostly to patients who receive free treatment as part of Operation Milagro (mostly from Venezuela, but also from the rest of Latin America). The two top floors (shown in the movie) are the most modern and are reserved for medical tourists and foreign diplomats who pay in hard currency.

Ordinary Cuban patients are not allowed in this hospital. To attract medical tourists, it promotes its services on an English-language website. Here is the irony: The hospital attracts Western patients by offering bundled prices for procedures, such as a range of $9,000 to $15,000 for open-heart surgery. An American patient would find it all but impossible to get such transparent pricing from a U.S. hospital.

Of course, the problems American patients have with hospital, insurance, and government bureaucracy pale beside the tragedy of Cuban (lack of) health care.