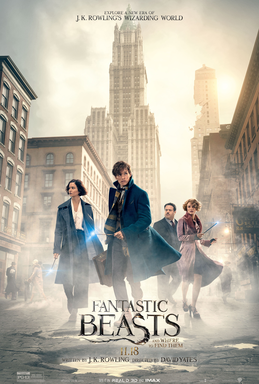 J. K. Rowling’s entertainment and cultural empire expands with the addition of Fantastic Beasts and Where to Find Them, a well-crafted action film that will surely push the Harry Potter film franchise beyond the $8 billion gross receipts milestone. Fantastic Beasts has already earned nearly $300 million worldwide, solidifying Rowling’s role as a leading producer and now screenwriter. This is good for liberty because Rowling’s story continues her interest in promoting tolerance, vigilance against tyranny, and the courage of everyday heroes.

The story begins as Newt Scamander, the author of what will become one of Harry’s standard textbooks at Hogwarts, lands in 1926 New York City. The city is a stopover, a port of entry into the United States, and we soon find that the wizarding world of North America operates differently than the one in England. Non-magical people are called No Majs rather than muggles, and their society is governed closely by the Magical Congress of the United States, or MACUSA, led by President Seraphina Picquery (Carmen Ejogo) and Graves, her Director of Magical Security.

I couldn’t help but note how the acronym MACUSA when spoken in the movie, rhymes with Yakuza, the transnational crime network based out of Japan. While I have no evidence that this was intentional, the analogy is not too much of a stretch, given the controlling nature of some in the Congress, the harsh justice meted out to those who disobey their rules, and the regressive nature of some of the laws.

The Congress has been relentlessly purging magical beasts because they are considered universally “dangerous,” placing Newt at immediate risk since he is transporting enough creatures to fill a nature preserve in his suitcase. Newt’s motivations become central to the plot because his life’s calling is to protect, conserve, and preserve magical beasts. He sees their beauty, accepting them for what they are rather than what others want or perceive them to be. A more open-minded and sophisticated approach would result in successfully integrating these creatures into wizarding society.

When some of these animals escape onto the streets and into the shops of New York, their mischief triggers a crisis that requires the Congress to intervene and the deployment of aurors to rein in wayward wizards. Newt is betrayed by disgraced auror Tina’s naive understanding of the Congress, but then forges a partnership with tinges of romantic attraction. Her sister Queenie joins the team while No Maj Jacob Kowalski ends up stumbling into their quest and enthusiastically assists in recapturing the animals.

The wizarding world’s problem, however, is much bigger than Scamander’s escaped beasts. The city is also under attack by an Obscurace, a dark force that manifests itself in wizarding children who try to conceal their powers. An Obscurace is pure evil—uncontrollable, indiscriminately destructive, and parasitic, using children as its host. We find that Newt has encountered and defeated one before, and this puts him in a unique position for understand its power. Not surprisingly, the Obscurace’s dark power is coveted by some wizards, particularly those in positions of authority within the Congress. What starts out as an attempt to recapture and save largely benign, often lovable if annoying creatures becomes a life-or-death struggle to destroy the Obscurace before all of New York is destroyed and the wizarding world revealed to all No Maj kind.

The dark quest complements embedded social commentary, another one of Rowling’s storytelling hallmarks. Set in the middle of the Roaring Twenties, a period of cultural dynamism, growing wealth, personal excess, alcohol prohibition, and the rise of organized crime, Fantastic Beasts examines the underbelly of Western culture, political power, and corruption through the lens of a parallel magical world. For example, Newt and Tina meet with a seedy and duplicitous goblin (played by Ron Pearlman) operating out of a speakeasy as a illegal trafficker of magical creatures. The Magical Congress prohibits marriage between magical and non-magical people. Magical humans are not allowed to own magical creatures. The Congress relentlessly enforces rules that prohibit activity and behavior that might reveal their world to non-magical people, even putting to death those that break these rules and appear to jeopardize the security of their world. Fantastic Beasts has plenty of anti-authoritarian and pro-individual freedom themes and subthemes for those willing to look. At one point, Newt observes that the U.S. magical world is not that much different from the one in Britain except that it’s less advanced (less politically and socially progressive).

Fantastic Beasts also continues Rowling’s explorations in the abuse of power. Those in authority try to usurp the Obscurus to expand their power, and, in the process, destroy any hope for redemption for the unwitting host (who is a socially marginalized character). Tolerance and the role of ordinary people standing up to evil remain front and center in the actions of the lead characters. Newt is no superhero; he is a bookish researcher, with a great deal of empathy for the plight of humans and beasts. The fallen auror Tina doesn’t have special powers or abilities (for a wizard), but she has a passion for justice and protecting the abused.

While the action in Fantastic Beasts is well timed and choreographed, and the plot is sufficiently layered and complex to keep many in suspense until the closing scenes, the characters are not particularly well drawn or layered. This may be intentional, to emphasize the unremarkable and everyday nature of the heroes. The only major character with a clearly defined arc is the No Maj, Jacob Kowalski, a World War I veteran who returned to mundane factory work but aspires to open his own bakery. He is brought into the journey by happenstance, but discovers a entirely new world with all its beauty and danger. As Jacob’s memories are about to be erased for the sake of preserving wizarding kind, Dan Fogler poignantly conveys Jacob’s feeling of loss and the injustice of the act even as he accepts its necessity.

These limitations in character development, however, don’t distract significantly from the film. Fantastic Beasts and Where to Find Them fits well into the pantheon of J. K. Rowling’s world, one that is largely consistent with the skepticism of power, the value of individual leadership and courage, and the importance of tolerance and understanding as a foundation for civil society. These are also values that map well over Millennials, as research by Anthony Gierzynski and Kathryn Threlkeld has shown in Harry Potter and the Millennials: Research Methods and the Politics of the Muggle Generation. Having them built into a solid, imaginative action film with dazzling special effects certainly doesn’t hurt.