Is a Trump Revolution in the Offing? 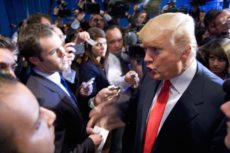 I have now demonstrated to my complete satisfaction that as a political prognosticator I am a total bust. Not that I put much effort into trying, to be sure, but I certainly developed firm ideas as the politicking proceeded over the past year or more. When Donald Trump first appeared on the horizon as a presidential hopeful, his actions struck me, as so much about the man and his ideas has struck me, as a bad joke. I gave him no chance of gaining the Republican nomination. After he had surprised me by doing so, I gave him a negligible chance at best of winning the election against Hillary Clinton, who was the overwhelming favorite of the political establishment and the beneficiary of a powerful political machine. Thus, my record in regard to Trump so far has been: wrong and wrong again. Of course, many others no doubt saw the matter much as I did, but companionship in error is no basis for excusing my incorrect judgments.

Now that Trump has been elected, many people—including some of my close acquaintance—are practically wailing and gnashing their teeth at the prospect of a Trump presidency. I understand why they feel as they do. I myself look forward to his actions in office with the greatest trepidation. I have always regarded him as a loose cannon, a man so ill-anchored in any visible principles and so lacking in genuine understanding and wisdom about economic and governmental affairs that I have marveled at observers who expected him to do this or that. To me, he has been and remains a complete crap shoot. At this point it is difficult to think of anything he might do that would come as a complete surprise to me, inasmuch as a vast set of possibilities seems always to be “on the table” for him.

Nevertheless, I think that those who are wringing their hands would do well to recall, if indeed they knew at some previous time, that even the president of the United States faces constraints. He is not in a position to do just anything he might decide to do. The government itself is a huge apparatus with many power centers. Moreover, the government officials who occupy the state’s commanding heights also work hand in hand with powerful people outside the government who also have great influence in the determination of how the government acts. Comprised of members of both groups, this so-called Deep State might well be said to command the government’s major decisions as much as it is made subject to them. There is continual give and take, but the Deep State movers and shakers can never be safely disregarded. Nor can they, in most cases, be voted out of office or forced to resign, because they occupy no formal office in the legislature or the bureaucracy. Elected officials and political appointees come and go, but the Deep State grinds on, seemingly inexorably, almost oblivious to who occupies formal offices, able to get huge, regular infusions of funds from the Treasury for its kingpins’ projects whether the partisan political weather be fair or foul.

None of this means that President Trump will be a powerless puppet; far from it. But it does mean that those who fear that his presidency portends a revolution of some sort, even the sort ushered in by Franklin D. Roosevelt’s election in 1932, are probably worrying unnecessarily. The United States of America, as countries go, is especially immune to sweeping revolution, in great part because it has come to have such a powerful, coherent Deep State. My advice (gratuitous, to be sure) would be: keep calm; keep developing events under observation; and do not project every unnerving development to its “logical conclusion.” Don’t panic and don’t despair. The country has taken nasty turns several times in its history, and it’s still here, still relatively prosperous, still not the worst place on earth for many people to live and work, however intrusive the state has grown over the years. President Trump and his subordinates will certainly try to accomplish some major changes once they are in power, but the United States has long been marked by great political and governmental stability relative to almost all other countries, and there is little solid reason to expect extraordinary instability now.

So, I do not expect anything one might call a Trump Revolution. Gridlock seems a better bet. But in deciding how much weight to give my judgment, one might do well to recall what a terrible political prognosticator I have been recently.