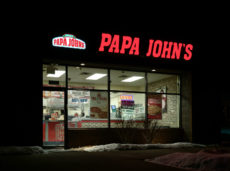 Parts of the southern United States were hit particular hard by hurricane Matthew last week. Between the wind and the rain, flooding and power outages took place from Florida up through the Carolinas.

For many of us, things like losing power are minor inconveniences. For others, however, this is not the case. Losing power can not only leave someone in the dark, but can utterly disconnect them from loved ones and the rest of the outside world.

Such was the case for one Florida grandmother, 87-year-old Claire Olsen. During the storm, Olsen lost power.

Her family didn’t hear from her for two days.

Her grandson, Eric Olsen, who lives in Omaha, Nebraska, became progressively worried about his grandmother. He stated in an interview that he kept calling the police and fire departments in his grandmother’s town, trying to get someone to check on her. These attempts were unsuccessful.

By Sunday, Eric was particularly worried. Still unable to get local authorities to do a wellness check on his elderly grandmother, he turned to an unlikely source for help—Papa John’s pizza. He explained, “[I thought,] ‘I’m going to order a pizza, and if they can deliver it, then I know she’s alive.’” In addition to ordering the pizza, he instructed the delivery person to call him when the pizza was delivered and asked that the delivery person give the phone to his grandmother when the call was made.

His plan worked well. The pizza was quickly delivered and, upon calling, the delivery driver gave the phone to Claire Olsen, who was able to talk to her grandson. In discussing his experience, Eric Olsen stated the following.

Police and fire couldn’t do it, but Papa John’s got there in 30 minutes and put the cell phone to her ear.

This story is pretty remarkable in a number of ways—all of which illustrate the power of the market and free enterprise. Here you have a man who lives in Omaha, Nebraska and a woman in Palm Coast, Florida. In case you’re curious, that’s 1,392.7 miles separating Eric from his grandmother—a 20+ hour car ride. Despite this distance, Eric was able to order a pizza in Omaha and have it delivered in Florida. If that doesn’t show the extent of our current markets, I don’t know what does!

Second, Eric was able to entice a for-profit company, Papa Johns, to engage in activity that actually had little to do with pizza. The inability or unwillingness (it’s unclear which applies here) of local authorities to do a wellness check on Ms. Olsen is an example of what we call “government failure.” Simply put, public actors failed to do their job. Here we have an example of private enterprise stepping up when public entities fail. How? Through the power of prices, profit and loss. By providing Papa Johns with a monetary incentive—the price of the pizza—Eric was able to get someone to check on his grandmother. Without knowing it, the pizza chain provided a very valuable service to Eric and his family by doing what they do best, making and selling pizza.

Economics teaches us that when prices are allowed to function and people are allowed to exchange goods and services, good things happen. People become better connected, have access to more goods and services, and are made wealthier. In many cases, private markets can make things happen where governments fails. For the Olsen family, the markets provided peace of mind—and pizza.