What Trump’s Taxes Really Tell Us about Politicians 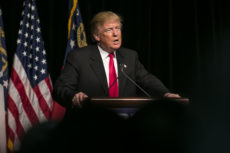 A few days ago, it was revealed that in 1995 Donald Trump declared a $916 million loss on his tax returns. According to The New York Times, Trump’s losses under the U.S. tax code would have allowed him to write off or avoid paying any federal income tax for a period of 18 years.

In light of these revelations, Hillary Clinton took the opportunity to sharply rebuke him, saying that, while he pretends to help working Americans, Trump benefits from “the same rigged system he claims he will change.” She continued, “He abuses his power, games the system, puts his own interests ahead of the country’s.... It’s always Trump first, and everyone else last.”

I think Mrs. Clinton is likely correct in her statements. Trump probably almost always puts himself first. But at the same time I’m reminded of a Biblical suggestion. That is, don’t make a fuss over the speck of dirt in your brother’s eye when there is a plank in your own. Indeed, given the number of scandals in which she is involved, it seems like this is a case of the pot calling the kettle black.

These “revelations” that Trump places himself before others or that Clinton looks out for her own best interests should be considered banal, not shocking. In fact, these types of observations are prime examples of basic economics and public choice.

First, Trump and Clinton both illustrate to us the principle that people respond to incentives. That is, we’d expect people to undertake an activity when the benefits outweigh the costs, and avoid an activity if the costs outweigh the benefits. Moreover, both candidates are what we’d call self-interested. Simply, they engage in activities they believe will make them better off.

We don’t yet know whether or not Trump paid income taxes in the years since 1995 as he has not released his returns. If Trump chose to use his loss to avoid paying income taxes, then he will have acted in the way any other person would have behaved! He simply responded to the incentives he faced. In a similar way, Hillary Clinton responds to incentives with regard to every scandal in which she’s currently entangled. Why does she choose to not speak more on her emails while working as Secretary of State, or Benghazi, or the Clinton Foundation? Because she feels the costs outweigh the benefits.

Second, the “scandal” regarding Trump’s taxes teaches us something else: Politicians, contrary to popular opinion, are actually people.

There is a tendency for many people (politicians, scholars, and everyday citizens included) to assume that political actors are “publicly interested.” That is, they put aside their own agendas in order to fulfill or maximize some broader notion of “social welfare.” Economists like Nobel Laureate James Buchanan have pointed out, however, that such an assumption is downright silly. Why would we assume that just because someone holds an office that they would suddenly be immune from the laws of economics? They aren’t.

In fact, political actors are just like any other economic actor that must make choices. Politicians respond to incentives like everyone else. Calling someone a “public servant” or putting her in public office does nothing to change the fundamental principles of economics.

The implications of this idea, that public actors respond to incentives as any private actor, are positively massive. If all politicians do in fact respond to incentives and work in their own self-interest, then we should rightly question the decisions of our elected officials. What is the reason a particular policy is being enacted? Is it really for the “common good,” or is it because it aligns with the incentives of political actors and the special interests who further their careers and policies?

Alas, in the current circus of American politics, it seems there is a new scandal every other day. But, like Trump’s taxes, most are cases of politicians responding to incentives.

All in all, I think a good friend and colleague, Chris Coyne, summed it up best on Twitter:

Main takeaway from Trump taxes: [people], including politicians, respond to incentives. Extend that logic to all government activities.