How Marxism Corrupts The Magnificent Seven 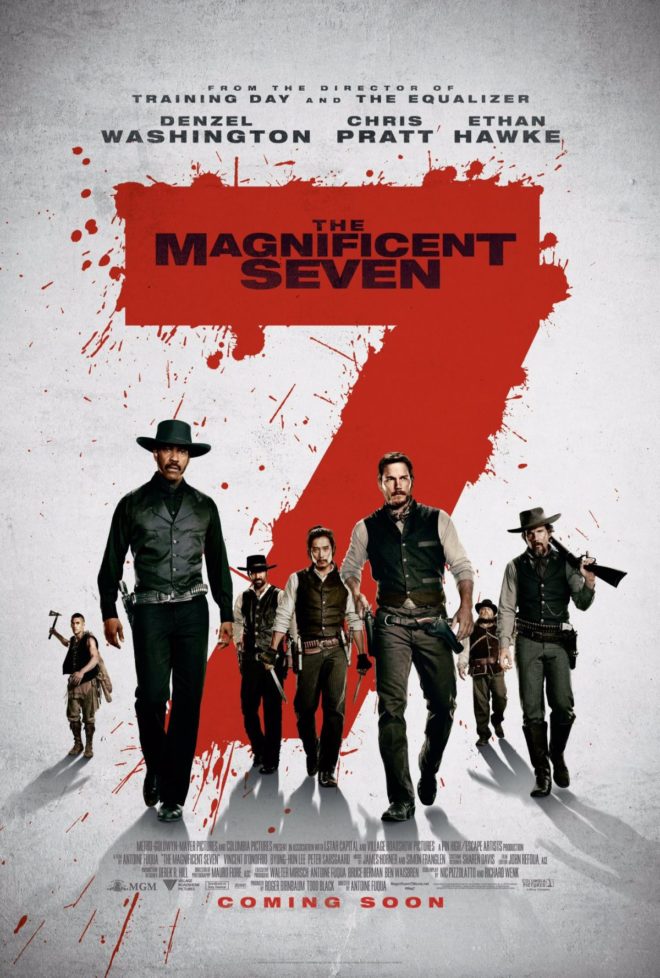 Capitalism doesn’t survive ten minutes in director Antoine Fuqua’s new remake of The Magnificent Seven. Mining baron Bartholomew Bogue (Peter Sarsgaard) stands before the residents of the western mining town of Rose Creek and proclaims that, because America has accepted capitalism, they have little choice but to submit to his economic predation on their livelihoods as small claims miners. When one of the townspeople stands up to him, Bogue shoots him at point blank range, killing him, while his henchmen attack and kill others to dash away any further thoughts of resistance.

The anti-capitalist backstory is clearly intentional, although its integration into the film’s narrative is awkward at best. “Capitalism” is not well defined in the film’s implied glossary, but the general meaning is clear. The opening scenes show abnormally thin men working Bogue’s mines as dynamite blasts through mining shafts under the hills. Men fall from wagons in their rush to collect meager earnings at day’s end. In the town-hall type meeting that Bogue crashes, the small-time miners are lamenting the grim reality that Bogue has bought out their friends, and they will have little choice but to follow suit. The implication is that power is concentrated in the hands of the few—the industrialist Bogue, in this case—while the many toil under the guns of the henchmen.

But The Magnificent Seven’s backstory is not without merit, although it follows a populist storyline rather than one embraced by economic historians. (See historian Burton Folsom, Jr., here, on the Myth of the Robber Barons.) The 2016 remake is set in 1879, squarely in the Gilded Age of America’s industrial revolution and five years after the Panic of 1873. The Panic ushered in a deep, five-year economic depression, and was triggered by the collapse of railroad stocks after a decade of overbuilding (heavily subsidized by the federal government) and the collapse in global demand for silver. Arrested economic development, falling wages in the railroads, and high unemployment triggered social unrest, including the Great Railroad Strike of 1877 (also called the Great Upheaval).

In the new film, Bogue is specifically referred to as a Robber Baron, even though his industrial background is murky and only visually implied through a glimpse at his vast mansion in Sacramento, California. Bogue nevertheless appears to have a historical analogue in copper-mining tycoon William A. Clark. After starting out as a miner during the Montana gold rush, Clark switched to banking and grew his business by repossessing properties held by miners who had defaulted on their loans. He also seemed prone to the Gilded Age excess that likely rankled the sensibilities of those less fortunate. Historically, however, the vast majority of the so-called Robber Barons (a derogatory term coined by the popular press, not economists) were railroad tycoons.

All these historical subtexts and tensions unfold in one way or another on screen, although they seem more a distraction than elements that propel plot. Bogue’s particularly psychotic ruthlessness never plays out as anything more than a uniquely villainous personality. When he criticizes John D. Rockefeller (oil) and Cornelius Vanderbilt (shipping and railroads) for building their success through political connections and government, Bogue claims in his next breath that he will ground his success in the real capitalist way of simply taking it. (I would have laughed, but this is a serious drama.)

This rich backstory, although one-sided and inconsistent with mainstream interpretations of America’s industrial revolution, seems squandered. The film’s lead characters are a motley bunch of vigilantes, not too dissimilar from characters in the 1960s film. They aren’t really motivated by political economy or a political philosophy. In fact, their motivations are strangely obtuse and unclear. The gambler (Josh Faraday, played by Chris Platt) seems mostly concerned about getting back his horse. An outcast Comanche warrior (Red Harvest, played by Martin Sensmeier) might be looking for some form of redemption, but the viewer has to fill in the blanks to make that leap. Ethan Hawke’s sharpshooter-turned-vigilante, Goodnight Robicheaux, is one of the few characters with a genuine arc, as he wrestles with nightmares and demons from killing too many people during the Civil War. He is trying to resurrect his own sense of honor and redeem himself after falling from past glories. The leader of the Magnificent Seven is a bounty-hunter named Sam Chisholm (played by Denzel Washington, in his first Western movie role) is more purpose-driven, although his motivations are never really clear until the end of the film.

Fortunately, The Magnificent Seven is saved by its outstanding cast. Denzel Washington shows again why he can open big films. Vincent D’Onofrio plays an aging tracker, named Jack Horne, with enough quirks and innate sense of justice to keep audiences rooting for the vigilantes. The film also mixes it up with new characters who are more than just nods to diversity, including Red Harvest, an ambiguously Asian assassin (Billy Rocks, played by Byung-hun Lee), and a Mexican outlaw (Vasquez, played by Manuel Garcia-Rulfo).

Thus, The Magnificent Seven does, in the end, become an engaging modern Western, particularly when it features lots of guns blazing that take out villains, cool stunts on horses, and a kill ratio worthy of a video game. The seven gunslingers dispatch 20 of Bogue’s top henchman while the tycoon is away in Sacramento, giving the townspeople of Red Rock a feeble glimpse of hope. But Brogue returns with an army of 140 fighters, raising the stakes for everyone involved. Since this film is a remake, it’s probably not much of a spoiler to observe that Bogue is unsuccessful in retaking the town. None of Bogue’s army survives, thanks in part to the ultimate sacrifices of several noble townspeople and just four of the Magnificent Seven.

Film buffs hoping for a faithful adaptation of Akira Kurosawa’s Seven Samurai, the pioneering 1954 Japanese film that prompted the 1960 Western, will likely be disappointed by the new film because it strays even further from the original in both substance and form. In Kurosawa’s film, masterless samurai (ronin) are outcasts in a very structured social hierarchy, and they seek to restore their noble names by protecting the disenfranchised. They adhered to a very strict code of honor, obligations, and responsibilities. Killing to avenge dishonorable acts was justified as a way to bring balance to Japan’s feudal social order. Each of Kurosawa’s seven samurai was on a quest for personal salvation, and the protection of the village was a means to achieve redemption.

The 1960 remake (directed by John Sturges) used similarly redemptive motives for most of the gunslingers enlisted to protect a Mexican village from a pillaging gang of bandits. This nobility is absent from the 2016 remake, however, in part due to a poorly executed attempt to shift the story’s theme from one of personal salvation or redemption to one of political economy. Sam Chisholm’s pursuit of Bogue hinges on revenge—a staple of every vigilante film—for an earlier slaughter, righting a personal wrong rather than rectifying a social injustice. No noble motivations, sense of honor, or paean to social justice unifies the 2016 remake. Ultimately, it will go down in film history as just another entertaining box-office success once it breaks the $100 million revenue mark.