Colombia Voters ‘Just Say No’ to Peace Pact with Narco-Terrorists 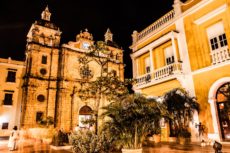 The result of Colombia’s plebiscite on the peace accord signed by the government and the FARC, the narco-terrorist organization, was a stunning surprise. More than 60 percent of the country abstained from Sunday’s referendum and, in a major blow to the polls, 50.2 percent of those who voted rejected the deal.

Two major aspects of the deal disturbed many Colombians. One was the high level of impunity granted to those who committed crimes during the fifty-year internal war. The other is the fact that the government guaranteed the drug-funded FARC leaders broad political participation, perhaps putting them on the path to victory in future elections.

There is no denying the immorality of the amnesty that would have been granted to thousands of guerrillas and of the very limited sanctions, which would have excluded prison terms, for the worst offenders who admitted their crimes. This concession was the result of the fact that the authorities were not able to defeat the FARC militarily. More than 200,000 deaths and several million displaced people are a horrific toll. The FARC would have continued to inflict horrendous punishment on Colombians were it not for the severe setbacks they suffered under President Alvaro Uribe (a critic of the current deal). Uribe’s successor, current President Juan Manuel Santos, would never have brought the FARC to the table if the terrorist organization had not felt compelled to negotiate.

The choice, according to the authors of the peace deal, was to continue the fight after half a century or agree to significant levels of impunity, as was the case during South Africa’s transition to democracy, the 1992 accord between the Salvadoran authorities and the FMLN guerrillas, the 1996 deal between the Guatemalan government and the URNG guerrillas, and the transition from Franco’s dictatorship to the rule of law in Spain. The Colombian people, the victims of the conflict, seemed, according to most polls, ready to accept the immorality of impunity in exchange for the (in their view, higher) morality of peace. Perhaps they would have, were it not for the other major objection.

It has to do with the political standing the FARC would have gained. The FARC would have been given 10 unelected seats in Congress, and 16 special constituencies would have been created in rural areas where the FARC have a powerful presence. Not to speak of the guarantee they were been given with respect to access to the mass media. This being an organization that believes in totalitarian socialism, critics were afraid that the FARC would achieve power through the democratic process and turn Colombia into a new Venezuela.

Political participation is an inevitable part of any peace deal with a violent organization; the whole purpose is to get the enemy to accept the democratic process under the rule of law. But the Santos government made more concessions on the political front than needed, a fact that is all the more disturbing given the FARC’s hold on part of the drug business. (The civilian reparations would not have come from the fortune controlled by the FARC but mostly from the government.)

Peace deals always involve a high degree of impunity and political participation by former guerrillas and terrorists. The fact that Colombia’s deal went too far in both respects is a major reason for the defeat of the “yes” vote. But an equally important reason are the main actors, President Santos (“yes”) and former President Uribe (“no”). Uribe, whom the country credits for the toll inflicted on the FARC during his mandate, is a force-of-nature who attracts the fanatical support of millions of his countrymen and women in the interior. Santos, by contrast, a highly educated man, comes from a family perceived as part of the elite and was never able to command a widespread loyalty. (He barely won re-election two years ago after leading the first round to an Uribe loyalist.) The support that the mainstream media and the political class gave to Santos contrasted with Uribe’s more modest campaign and connection to the silent majority.

What will happen now? Colombia will not necessarily go back to war. Uribe has offered Santos his support for a new deal that would amend the main aspects of the one rejected at the polls, and the FARC leaders, who are now very visible, intend to continue to search for a peaceful solution. Perhaps the “no” vote is the beginning of a better deal. If not, anything is possible.

For more on Colombia’s political context, see Liberty for Latin America: How to Undo Five-Hundred Years of State Oppression, by Alvaro Vargas Llosa.