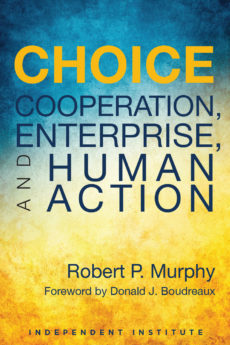 September 29 is the birthday of Ludwig von Mises, one of the giants of the Austrian School of economics. In my book Choice: Cooperation, Enterprise, and Human Action, I distill the work of Mises as presented in his masterpiece, Human Action. Elsewhere I have summarized his contributions to economic science, so in the present post I will focus on a single topic where Mises fundamentally changed my own worldview: the military and the market.

Before I encountered Mises’s analysis, I was a young conservative/libertarian with a strong affinity for the free market. However, although I knew that (say) minimum wage laws wouldn’t really help unskilled workers, and that rent control laws weren’t effective ways to provide affordable housing, nonetheless I made a big exception for genuine emergencies like a world war. In particular, I was not confident in trusting “market forces” with resource allocation for a major undertaking such as fighting the Nazis. In this situation (so I thought), of course you would need a powerful federal government to override price signals and make sure enough steel, rubber, gasoline, etc. went into the war effort.

(To avoid confusion, in this post I am not commenting on the legitimacy or wisdom of the U.S. government’s entry into World War II. I am merely taking that decision as granted, and then looking at the economics of fighting a war. This is a topic on which I clearly remember learning from Mises’s writings.)

Yet Mises quickly convinced me that I was underestimating the resilience of the market process with its profit and loss signals. Mises devotes an entire chapter in Human Action to the economics of war. In one section, he first acknowledges the conventional view that free markets can be tolerated in peacetime but that government interference with markets is necessary for war. He then demolishes this viewpoint:

What America needed in order to win the war was a radical conversion of all its production activities. All not absolutely indispensable civilian consumption was to be eliminated. The plants and farms were henceforth to turn out only a minimum of goods for nonmilitary use.... The realization of this program did not require the establishment of controls and priorities. If the government had raised all the funds needed for the conduct of war by taxing the citizens and by borrowing from them, everybody would have been forced to cut down his consumption drastically. The entrepreneurs and farmers would have turned toward production for the government because the sale of goods to private citizens would have dropped. The government, now by virtue of the inflow of taxes and borrowed money the biggest buyer on the market, would have been in a position to obtain all it wanted....

The sudden transition from peace to war revolutionizes the structure of the market, makes radical readjustments indispensable and thus becomes for many a source of high profits. The planners and interventionists regard such profits as a scandal. As they see it, the first duty of government in time of war is to prevent the emergence of new millionaires. It is, they say, unfair to let some people become richer while other people are killed or maimed....

It may be admitted that it is not “fair” that war enhances the profits of those entrepreneurs who contribute best to the equipment of the fighting forces. But it would be foolish to deny that the profit system produces the best weapons. It was not socialist Russia that aided capitalist America with lend-lease; the Russians were lamentably defeated before American-made bombs fell on Germany and before they got the arms manufactured by American big business. The most important thing in war is not to avoid the emergence of high profits, but to give the best equipment to one’s own country’s soldiers and sailors. The worst enemies of a nation are those malicious demagogues who would give their envy precedence over the vital interests of their nation’s cause. [Mises, Human Action, Scholar’s Edition, pp. 821-823]

As the quotation above illustrates, Mises wrote with authority on such subjects. Not only did he have an expert command of economic theory, but he also was a historian who could write quite knowledgeably on military history. (I should add that Mises could also write knowledgeably on philosophy, and even provided cogent footnotes relating his discussion to issues in psychology, sociology, and even quantum physics.)

However, I do not wish to give the impression that Mises was in some sense a “war hawk.” Although he thought social organization based on private property and sound money was the key to a strong military defense, Mises recognized that war itself was inimical to the peace and prosperity characterized by a genuinely liberal market order. Mises wrote: “The social division of labor and cooperation rests upon conciliatory settlement of disputes. Not war, as Heraclitus said, but peace is the source of all social relations” (pp. 172-173). Indeed, we can understand the passion with which Mises defended the market economy precisely because he associated it with the broader goals of peace and harmony among nations.

In this brief tribute I have focused on just one element of Mises’s work, which I can distinctly remember completely refining my own perspective as a young man. For those who have yet to read this giant in economic thought, I invite you to explore the treasure trove of riches in the writings of Mises.